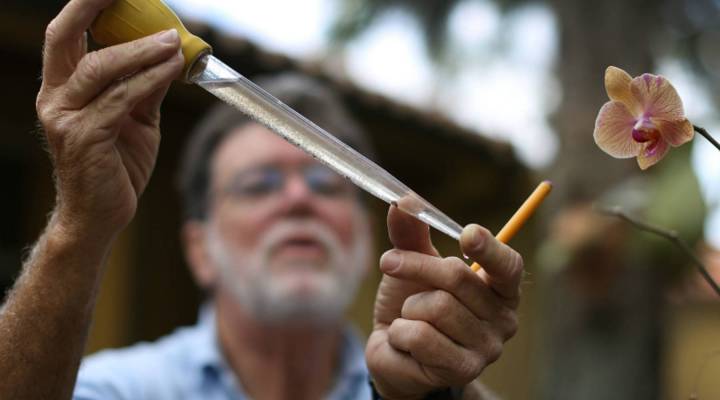 COPY
A Miami-Dade County mosquito control inspector looks at mosquito larva in a sample taken from a pool of standing water before using a pesticide. The county has been proactive in fighting the Zika virus. Joe Raedle/Getty Images

A Miami-Dade County mosquito control inspector looks at mosquito larva in a sample taken from a pool of standing water before using a pesticide. The county has been proactive in fighting the Zika virus. Joe Raedle/Getty Images
Listen Now

Spring break draws to a close for Congress next week. One of the more pressing items is how much money to put toward Zika prevention. More than 500 cases have been reported in the continental United States, all stemming from people who had traveled to Zika-prone regions. And health officials fear those numbers could be much higher. In the meantime, Congress returns to a Zika funding squabble.

The White House asked for $1.9 billion to fight Zika. The Senate offered $1.1 billion toward mosquito extermination and research, and the House offered up $622 million.

“Congress is deliberating or dithering, depending on how you look at it,” said Henry Miller, a public policy fellow with the Hoover Institution. “The money will come because it’s politically expedient to provide it.”

But Miller said the money is just a distraction from what he calls the dysfunction among regulatory agencies, like the Food and Drug Administration and the Environmental Protection Agency, involved in Zika solutions such as vaccines and spraying.

Roger-Mark De Souza, who directs the Maternal Health Initiative at the Wilson Center, said there’s debate about whether Zika is a priority, and “the degree to which it is really affecting the U.S. population now and what that means.”

Also on what to do about it. De Souza says, for example, spraying for mosquitoes is the most expensive part of Zika prevention.