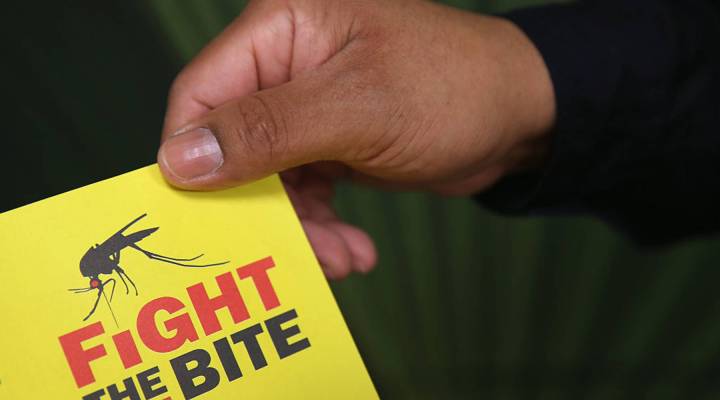 In the U.S., health departments are preparing to contain the spread of Zika virus with a response that includes educational materials like the pictured literature. But U.S. territory Puerto Rico is struggling with its own preparations, given its massive debt. John Moore/Getty Images

In the U.S., health departments are preparing to contain the spread of Zika virus with a response that includes educational materials like the pictured literature. But U.S. territory Puerto Rico is struggling with its own preparations, given its massive debt. John Moore/Getty Images

Questions continue to swirl around Puerto Rico’s $72 billion financial crisis as U.S. Treasury Secretary Jack Lew visited the territory Monday. Amid concerns about how the island’s government can pay off the debt, officials are also worried about health implications.

The crisis could hamper actions to stop the spread of the Zika virus, the White House said on Monday. There are nearly 700 reported cases of Zika on the island, yet hospitals are laying off workers as the territory struggles to fund response efforts. The virus is transmitted through mosquitoes bites and is linked to birth defects.

“Given the fact that there are reported cases of the Zika virus in Puerto Rico, this seems like a pretty bad time for investments in Puerto Rico’s public health system to be cut,” White House spokesman Josh Earnest said in a news briefing.

The first reported death tied to the Zika virus was actually from Puerto Rico. In the U.S., there are 472 reported cases of Zika as of May, all of which are associated with traveling, according to the U.S. Center for Disease Control.

But it’s not just Puerto Rico that’s trying to figure out how to deal with Zika.

The virus has also caused concern in Brazil, the host country of the upcoming Olympics, given that Zika may be scaring away potential travelers. And, the World Health Organization, or WHO, one of the major players in managing the Zika outbreak, is also hampered by funding when it comes to addressing the virus.

Hear more about that issue by clicking the audio player below.

Reuters contributed to this report.