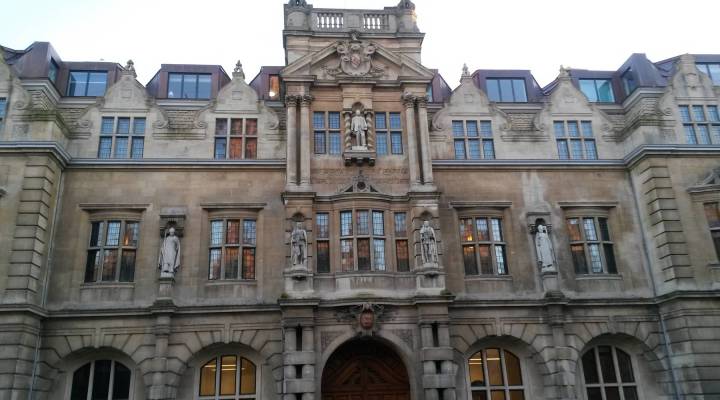 COPY
The statue of Rhodes at Oriel College at the top of the façade. Stephen Beard/Marketplace

The statue of Rhodes at Oriel College at the top of the façade. Stephen Beard/Marketplace
Listen Now

A small stone statue has sparked an angry protest at Oxford University.

The statue, set in the façade of Oriel college, is of Cecil Rhodes, the 19th century mining tycoon who built the De Beers diamond company in southern Africa and left much of his fortune to the university. Under the Rhodes Scholarship thousands of gifted young people from around the world have been able to study at Oxford. Former US president Bill Clinton and no fewer than three Australian Prime Ministers are among the many distinguished alumni.

Rhodes’s statue stands as a tribute to his philanthropy and his own glittering career.

But the diamond magnate had a darker side. He massacred thousands of Matabele tribesmen, pillaged the resources of southern Africa and preached the racial superiority of white Britons. His statue at the University of Cape Town , South Africa was removed last year.

Athinangamso Esther Nkopo — a South African studying at Oxford — is a member of the Rhodes Must Fall campaign that is now calling for the magnate to be knocked off his pedestal at Oriel College.

“Rhodes was a racist, a white supremacist. He made money from plundering South Africa, from the diamond mines which killed hundreds of thousands of black people. The fact that he paid for 8,000 Oxford scholarships has not redeemed him.” she said.

The College has promised to mull over whether or not the statue should be taken down. But the overall head of the university, Lord Patten, has come out against what he sees as an attack on the fabric of a beautiful old building and he has condemned what he calls “ a trend of intolerance” at British and American universities.  Most of the passers-by whom Marketplace interviewed in front of Oriel College also called for the statue to be left in its niche.

The Rhodes Must Fall campaigners point to an alleged double standard:  many westerners applauded when statues of Lenin came crashing down after the collapse of communism and when the giant image of Saddam Hussein bit the dust.

Athinangamso Esther Nkopo claimed that her campaign isn’t only about a statue. It’s also about drawing attention to what she calls Rhodes’s most pernicious bequest to Oxford.

The university flatly denied the charge of racism, challenging those statistics:  in a statement the university said that a quarter of all its students are from black or ethnic minority backgrounds and there are five black professors.

The argument over Rhodes — and his legacy — continues.