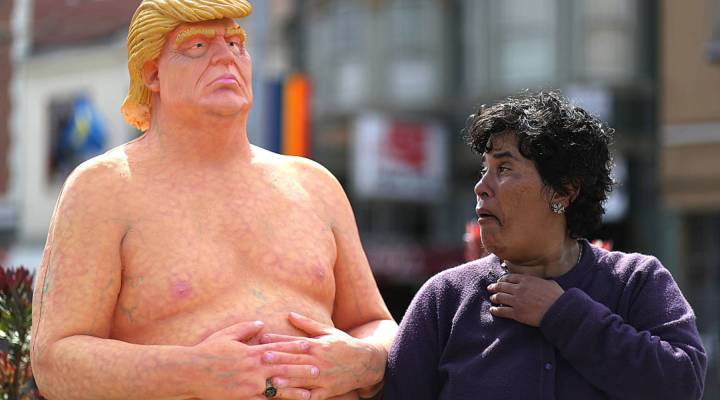 A statue of Donald Trump, titled “The Emperor Has No Balls,” could be worth thousands of dollars more than an image of Hillary Clinton titled, “Hillary Clinton Cojones.”

The artworks go on sale in October as part of a fundraising effort for an immigrant support group, Reuters reported today. The Trump statue is a life-sized nude depiction of the Republican presidential nominee. It is from a series of statues, created by an artists collective called INDECLINE, that were placed in public areas in several cities earlier this month.

Julien’s Auctions told Reuters that most of the other statues were confiscated or destroyed and the statue in Los Angeles was the only one remaining. The statue is estimated to bring in $10,000 to $20,000 at the Oct. 22 auction.

The art depicting Trump’s rival and Democratic nominee Clinton may go for a little less. The image depicts Clinton wearing a tuxedo and is estimated to bring in up to $15,000.

A portion of the profits will go to the National Immigration Forum. The auction’s announcement comes just as Trump prepares to address immigration issues in a speech scheduled for today.