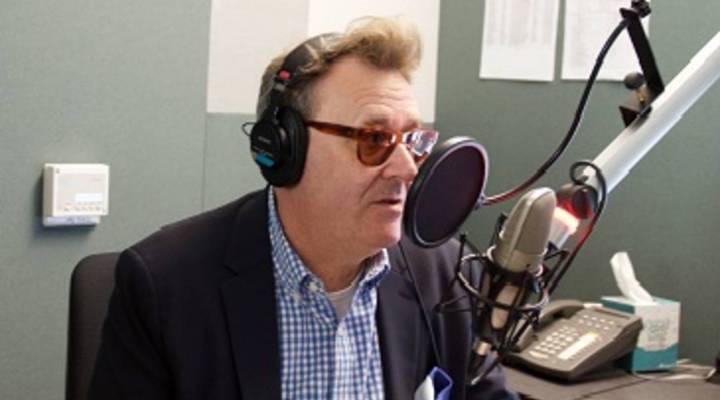 If you have ever watched the show, “Inside the Actors Studio,” you’ve probably heard host James Lipton ask his guests questions from the Proust Questionnaire, a relatively famous series of questions of his guests about their deepest desires, what they want heaven to look like, things like that.

We designed a similar series of questions, but with money as a central focus, because how we spend and view money can often reveal something greater about ourselves.

We call it the Marketplace Quiz and this week Greg Proops, comedian and host of the podcast “The Smartest Man in the World,” sits in the quiz chair.

Fill in the Blank: Money can’t buy you happiness, but it can buy you ___.

Money can’t buy you happiness, but it can buy you drugs and alcohol, which can make you have the illusion of happiness … temporarily.

Baseball historian, because by then women will be playing and they’ll let black people manage again.

When I realized I couldn’t do anything else, and that I hated working in an office more than life itself, and I used to lay on the floor and pretend I was dead.

I have several autographed pictures of Willie Mays, and an autographed picture of Joe DiMaggio that says “Happy Birthday Greg” on it that a friend got for me. I also have a “Star Wars: Episode 1” polar fleece because I was in “Star Wars: The Phantom Menace,” but before it was called “The Phantom Menace” when we shot it, it was called “Episode 1.” Mine says “Episode 1,” so it’s like having a “Revenge of the Jedi” t-shirt. Nobody has them, I have one. Don’t come to my house.

What is something everyone should own no matter what the cost?

A conscience. Very difficult one for the wealthy.

Oh golly! Be prepared for every manner of surprise. It never stops surprising me. And I hesitate to call it a career, because it wasn’t like I was going to do something else. I don’t have any other aptitudes. I can only blather.

What was your first — ideally paying — job?

My first job that I got paid to do was babysitting, as I recall. Then, of course, I was a paperboy, a bus boy, a sandwich maker, waiter, every menial job, a janitor, I was a janitor when I was 15. And they gave us a $5 bonus for Christmas, I’m not kidding, $5. Which by the way wasn’t a lot then either. And then I remember, I was in a comedy team, and one night we made $7 to split. And we threw the money in the air and rubbed it on each other [laughter], because we were hysterical we had made $3.50 each.