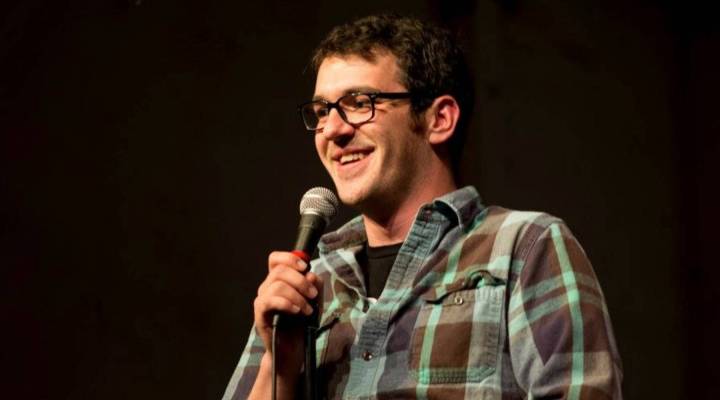 Dave Ross, comedian and host of the podcast, “Terrified with Dave Ross,” drove to our downtown Los Angeles office recently and took some time out to take our quiz.

Comedian dude. I chose wisely. Or I would sell drugs, I think. Seems like you would make a lot of money and then it’s easy and also you have drugs.

Oh well, if I really were to get into this question it would take hours and it would be upsetting. Because the thing about being a comic — I don’t think no one knows this because every single person in the entire world is a comedian now, including you listening, and the person next to you, and all the people you know who aren’t a comedian are going to start soon. It’s pretty annoying — but I mean the thing that a lot of people I don’t think consider about live performing as a career or as a consistent thing to do, is how taxing it is on you emotionally. That sounds like a “champagne problems”‘ thing to say, but it’s really not. You’re performing, you’re trying to impress the crowd, you’re trying to get a good response out of them, you’re trying to entertain them and make them happy, and so if you do that well and they respond positively to you, that feels amazing, and then the next time, the most talented human in the world bombs sometimes. And that feeling is always bad, because even if you have years and years of validation of people responding well to you and telling you that you’re great, standing in a room with people in it who don’t think you’re funny and actively tell you so feels bad. That’s a group of people that doesn’t like you. And so the ups and downs of it really test you emotionally.

And also you’re surrounded by other comedians, and you want success, and they want success, and they’re your friends, and you’re not really competing with them because there’s not a limited amount of spots, but you want with what each other have, and so it just tests you emotionally in ways that a lot of other things don’t. So yeah, don’t be a comedian. Any of you. No seriously, start though it’s fun.

Honestly, one or two weeks ago, and I’m still kind of questioning it.

Oh man, my cat dude. My cat. I own that cat. It’s mine. You can’t take it from me. And I think that’s funny. I think about that sometimes how I own a thing — like it’s alive, and I own it. That doesn’t make any sense. It doesn’t make any sense. It was born and now I own it. That’s crazy, that’s like very close to upsetting. And I’ll bet you that there will be a time in history where that is looked upon as like appalling.

I worked at Burger King when I was 16. It was perfectly fine, I didn’t hate it and I didn’t love it. And what was great was that there were lifers there. There was one dude who loved Burger King, and every day I would come in and he’d be like, ‘Dude! Did you see the Whopper Junior’s coming back?’ And he was the best part of my day every day. People always talk about like, ‘if you do something you love, then you won’t work a day in your life.’ And that dude found it man, and it was Burger King. I wish I were him.

If money was no object, what’s the first thing you would buy for yourself?

I don’t know, if I had the most money, I would buy, like … I might buy like a nuclear weapon. How cool would it be as a person to acquire proliferation. That’s like funny, that would maybe make me the greatest comedian of all time.