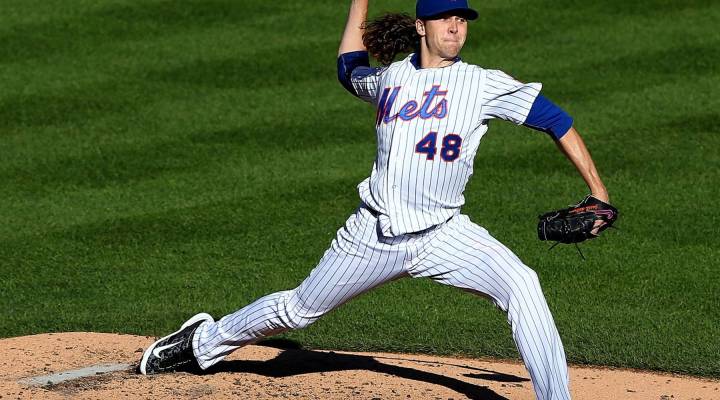 Baseball economics hits a homerun for the Mets

COPY
Jacob deGrom is a young player with the relatively low salary of about $556,000. Elsa/Getty Images

Baseball economics hits a homerun for the Mets

Jacob deGrom is a young player with the relatively low salary of about $556,000. Elsa/Getty Images
Listen Now

On Friday night, Game 1 of the National League Division Series pits the New York Mets against the Los Angeles Dodgers. It will be the Mets’ first trip to the playoffs since 2006, and they have made it largely on the strength a pitching staff that is young and relatively poorly paid.

The Mets Game 1 starting pitcher, Jacob deGrom, was paid around $556,000 for the 2015 season; Dodgers starter Clayton Kershaw earned around $31 million.

DeGrom is young, and Major League players don’t reach free agency — and more money — until they’ve been in the league for six years.

“[It] means that players aren’t paid anywhere close to their value,” said Victor Matheson, who teaches economics at College of the Holy Cross in Massachusetts.

Smaller market teams rely on young, cheap talent. The Mets are in New York; it’s not exactly a small market, but they’ve done it differently.

“The Mets have not been willing to invest in free agency, and instead have tried their luck in their farm system, and it certainly has paid out for them this season,” said Matheson.

Still, at some point, the Mets will have to make some big salary decisions.

“Will they actually go all out to keep this young staff and pay the dollars the market will bear, once they’re eligible for greater dollars?” asked Kenneth Shropshire, a professor at the University of Pennsylvania’s Wharton School of Business.

It’s not a question that needs to be answered this season.