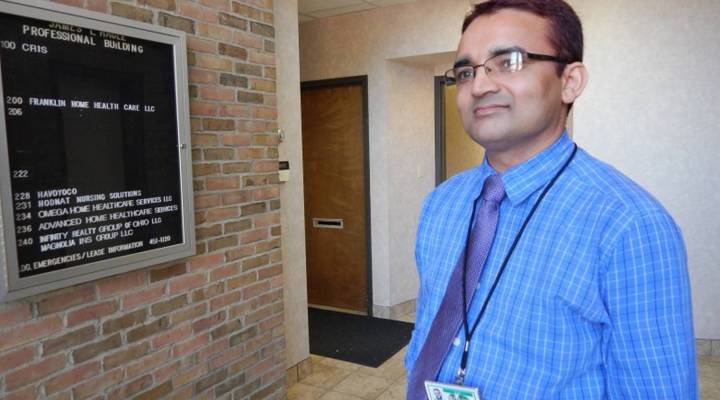 COPY
Tara Dhungana came to the U.S. five years ago after nearly two decades in a camp in Nepal. He's now the head of employment services for Community Refugee and Immigration Services in Columbus, Ohio. Lewis Wallace

Tara Dhungana came to the U.S. five years ago after nearly two decades in a camp in Nepal. He's now the head of employment services for Community Refugee and Immigration Services in Columbus, Ohio. Lewis Wallace
Listen Now

When Tara Dhungana was about to start sixth grade in Bhutan, his family took what he thought was a trip.

“When we left the country, my parents were saying we would come back a few weeks after,” he said.

They packed a few bags and left their animals in the yard, vegetables still growing in the garden. They arrived in a refugee camp in eastern Nepal, and Dhungana spent the remainder of his childhood there.

“You don’t know what tomorrow has for you,” Dhungana said. “It’s always dark, right? Tomorrow is always dark.”

Today, the world refugee crisis is growing. And while the United Nations says most displaced people live in cities and towns, many still stay in camps for long periods. When people come to the U.S. after years in a camp, they face unique challenges. Many have never worked and have had little to no education.

In the late 1980s and early 1990s, Bhutan drove out more than 100,000 Lhotshampas, Dhungana’s ethnic group, as the government began to see them as a political threat. It wasn’t until 2007 that several countries agreed to take in some of the Bhutanese refugees, and some 66,000 Bhutanese have been formally resettled in the U.S. since then.

Dhungana came five years ago, and at first, he said it was really hard. He found a job at FedEx through a temp agency fairly quickly, but he felt very isolated. When he and his wife came home each day, “We just cried, literally cried,” he said.

“I think the city is welcoming,” he said.

But a welcoming vibe may not always be enough. Lots of people come straight from camps where they had nothing to do and no education. In Ohio, they usually find work for low wages in warehouses or hotels. A few Ohio employers have whole teams of Bhutanese workers, with managers speaking in Nepali.

“We have a large group of individuals who are employed at about the three-month mark, which is what the government aims for,” said Megan Zarnitz with Catholic Charities in Cincinnati. Cincinnati has resettled at least 1,000 Bhutanese refugees since 2009.

The federal government sets a goal for most refugees of economic self-sufficiency in 30-90 days. After 20 years in a camp, especially for older people, the shock and pressure can lead to depression, and suicide rates are high in the Bhutanese community.

One gathering place for the Bhutanese community is at the South Asian Bazaar in Columbus. It’s a nondescript storefront in a small strip mall, but inside, it’s hopping.

“Business is picking up for the community. There’s lot of competition,” said co-owner Bhim Bastola. “We love competition.”

People look at clothes and weigh bags of food, and groups of women come in from a Hindu religious festival dressed in bright red.

“Our ladies are really fond of garments,” Bastola said, laughing.

Bastola spent a little time in the camps. He is doing well here, but he and his business partner are both educated — Bastola does people’s taxes, and his partner runs a realty company out of the back. They say hundreds of Bhutanese families have bought homes in just the last few years and are beginning to put down roots.

But many still struggle with finances and mental health issues. Bastola said education is the key for those coming out of camps.

“Technical education, higher education is a must,” he said.

He thinks the transition has gotten easier as more people have come. Columbus has grown into a hub for the community, with Bhutanese refugees moving from Oregon, Florida and Rhode Island to be closer to a larger community.

But for Bastola, there are still those earlier memories of his life on a farm in the foothills in Bhutan. He’d like to move out to the Ohio countryside one day.

“I still reminisce those days,” he said. “Cool air, open air. Away from the din of the city. Peaceful, and that’s it. It’s a better quality of life there.”

But for now, he has family here and a shop to run.