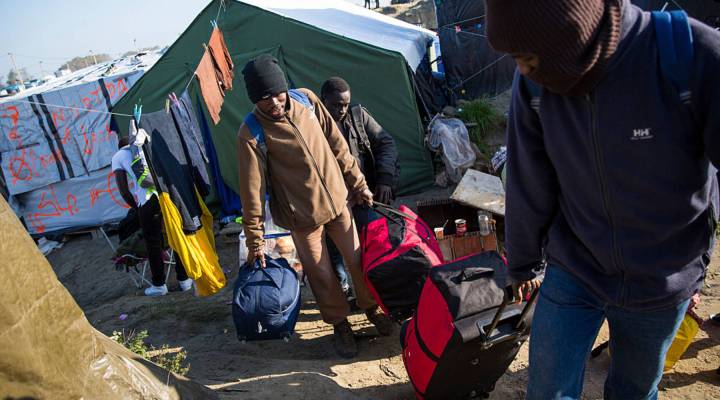 COPY
Migrants leave with their luggage at the Jungle migrant camp in Calais, France. Migrants are leaving the Jungle migrant and refugee camp by coach for a second day as French authorities clear the camp of an estimated 7000 people ahead of its demolition.  Jack Taylor/Getty Images

Migrants leave with their luggage at the Jungle migrant camp in Calais, France. Migrants are leaving the Jungle migrant and refugee camp by coach for a second day as French authorities clear the camp of an estimated 7000 people ahead of its demolition.  Jack Taylor/Getty Images
Listen Now

On Monday, the French government began dismantling the refugee encampment known as “The Jungle” in the French port city of Calais. Adjoining the main highway to the Port of Calais, the field in an industrial zone has been a stopping point for migrants hoping to find a way across the English Channel to the U.K.

Despite years of attempts to eliminate the camp, the French government recently estimated its population at 6,500, proof of enduring attraction of the U.K. over France for many migrants.

The road and bridge immediately adjoining the camp lined with plastic mesh topped with barbed wire to keep migrants off the highway. Some have tried to sneak aboard trucks to get to the U.K., attempts that have gotten more desperate as crossing the border has become increasingly difficult.

As the government began its operation, people  with backpacks and rolling suitcases are visible from the bridge leaving the camp – for good, the French say – sent, for now, to other parts of the country.

The view from a small hill in the center of Calais’ refugee camp, looking West towards the fencing where the residents often attempted to board lorries heading to the Port.

Marion Deloule, 21, a volunteer from Paris , was giving French lessons in the camp’s makeshift school.  Watching the evacuation on Monday, she said many of her students really wanted to reach Britain.

“I have one family here,” she said, “father, mother, three small children who come to school every day. And they are just are here waiting and they don’t know what to do.”

There are unaccompanied children but also adults, “who have family in England, who have opportunities in England,” noted Thierry Kuhn, director of a large French NGO called Emmaus, which works with refugees.

Unemployment in the U.K. is  lower than in France. Many arrivals in Calais also speak some English already, so they’d face less of a language barrier there. Some also perceive the U.K. as potentially more welcoming than France.

France is offering the camp’s residents temporary housing spread around the country while they petition to stay in France or until they agree to be sent back — mostly to Eritrea, Sudan or Afghanistan. These nationalities are all having a harder time winning refugee status in Europe than Syrians.

The dispersal is a plan not all French towns have welcomed.

However, of the camp’s residents, Kuhn estimated that only about fifty percent are readily prepared to board the buses to other parts of France. Some clashed with police the night before the evacuation began. “We also see families, we see migrants on the coast, who’ve left the Jungle [to avoid the evacuation], who will come back,” Kuhn said.

The U.K. agreed in the last several weeks to receive hundreds of unaccompanied minors but for the rest, there’s no clear legal path to the U.K.

Construction on a wall, funded by Britain, to block access to the main road that leads o the Port of Calais. The wall is designed to try and keep people from hitching onto vehicles to get to the port, and try to get to the U.K.

And while France may say this is really the last time camp in Calais will need to be dismantled, just past the end of the mesh fencing along the field, construction crews are at work erecting a wall along the side of the road. The U.K. is paying for the 13-foot-high barrier that will extend a kilometer up the highway, making it even harder for migrants to stow aboard trucks headed for the port, and a chance to reach Britain.