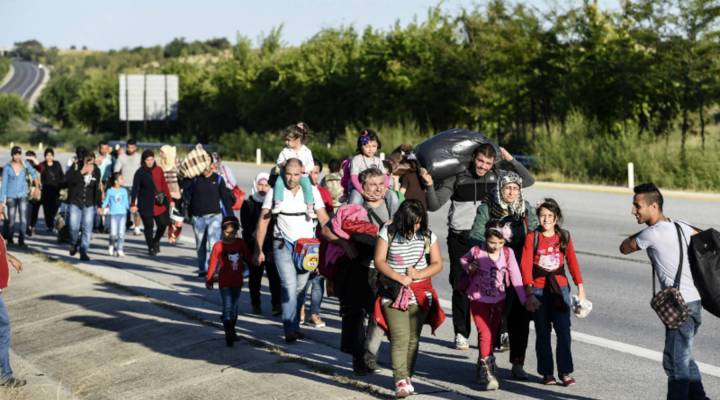 COPY
Syrian refugees and migrants walk along a highway on Tuesday on their way to the border between Turkey and Greece in the northwestern Turkish city of Edirne.  BULENT KILIC/AFP/Getty Images

Syrian refugees and migrants walk along a highway on Tuesday on their way to the border between Turkey and Greece in the northwestern Turkish city of Edirne.  BULENT KILIC/AFP/Getty Images
Listen Now

We’re in the middle of the biggest mass migration in Europe since the end of the World War II, and as distasteful as this may sound, that’s a huge business opportunity. It ranges from housing refugees to selling commodities. The approach of business owners ranges from being aware they’re working with a vulnerable population to taking advantage of them. Anton Troianovski wrote about the migration industry for Wall Street Journal.

On the private enterprise business of migration:

We took a look at all the different ways private companies are helping shape the migration experience in Europe. It starts on the small Greek islands where refugees and migrants arrive, where shop owners meet them selling camping supplies and canned meat, and it goes all the way to a big London private equity firm that owns one of the major refugee camp operators in Europe.

On being a volume-based business:

The way one of those private equity folks described it to us is “managing refugee camps is essentially a hostelry and care business where you happen to be catering to refugees.” Refugees, of course, generally don’t have that much money to spend, and as a result, it’s a volume business, as one of those folks told us.

On how much money can be made:

It’s clearly a growth business. This refugee camp operator had revenues of $100 million approximately, last year, which is triple of where they were in 2007. Another example is a Western Union branch manager in Athens … he told us he’s been dispersing 20,000 euros a day to many of the migrants going to Athens on their way up north. He told us that that was money he wouldn’t be making anywhere else in Europe.

On migrants making up for a lack of tourism:

You know, I mentioned they don’t have that much money to spend, but as a matter of fact, many of these migrants are formerly middle class citizens in Syria and elsewhere, and are paying full freight for hotels, even buying breakfast. We’re even seeing competition for their business, for example, among the different cell phone providers down in Greece. You know, one of the ways that we found entrepreneurs and business people in Europe are looking at this is that this is a big group of consumers that are coming into this rather stagnant economy.

On everyone counting on this revenue stream:

If you’re that private equity firm, their investors include major American pension funds like the California state teacher’s retirement system and the Maryland state retirement system. They are expecting growth, and they’re expecting profits. And it should also be said that it doesn’t look like that growth is going to stop anytime soon.