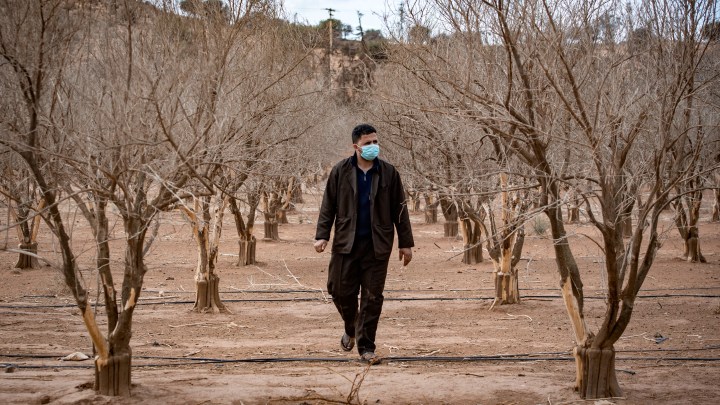 COPY
A farmer walks among orange trees dried out by a drought in Morocco's southern plains in October 2020. Water scarcity will likely be a cause of migration in Northern Africa over the coming decades, according to a World Bank report. Fadel Senna/AFP via Getty Images
A Warmer World

A farmer walks among orange trees dried out by a drought in Morocco's southern plains in October 2020. Water scarcity will likely be a cause of migration in Northern Africa over the coming decades, according to a World Bank report. Fadel Senna/AFP via Getty Images
Listen Now

More than 200 million people worldwide might have to leave their homes and communities over the next 30 years as a result of climate change.

In some places, the mass migrations could start within the next decade, according to a new report out this week from the World Bank.

In some parts of the world, like the Mekong Delta in Vietnam, sea-level rise will push people toward cities like Hanoi. In Morocco and other parts of North Africa, “the story is really about water scarcity,” said Viviane Clement, a climate change specialist at the World Bank who worked on the report.

In Africa, Asia, Eastern Europe and Latin America, “climate change is emerging as a potent driver of migration within countries,” she said.

In some ways, she said that could be a good thing if large numbers of people move out of areas that are especially vulnerable to climate change.

That’s if they move, though.

“We have seen these predictions of hundreds of millions of people moving as a result of climate change since the 1990s and even before, and we have not seen those play out,” Karen Jacobsen, a professor of global migration at Tufts University’s Fletcher School.

That’s not because climate change isn’t happening, she said. “It’s because people cannot move, even if they want to, even if they know that they should … people can only migrate if they have the means to migrate.”

Many people who live in areas being hit the hardest by sea-level rise and extreme heat don’t have the means to migrate, however.

Even when people do have resources, “migration is tricky … because people have a lot of incentive to stay where they are. People have jobs and family,” said Solomon Hsiang, a professor of public policy at the University of California, Berkeley.

“So I think what we’ll see first is a lot of people experimenting with spending time in other regions, maybe for prolonged periods,” he said.

Just like so many people have done during COVID-19 and after hurricanes and wildfires.