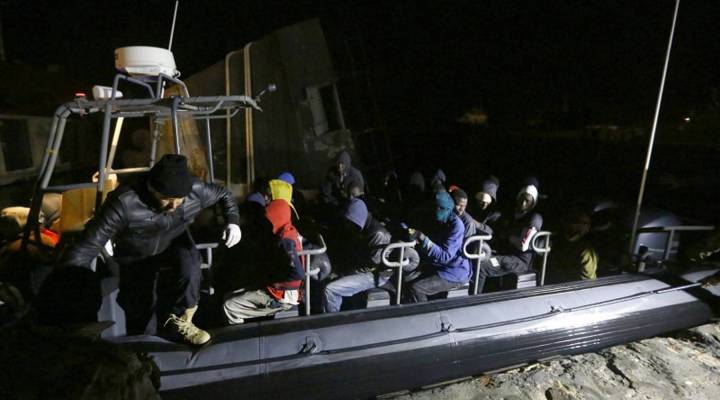 COPY
Libyan coast guard police help immigrants who were rescued at sea off the coast of Libya on Sunday.  MAHMUD TURKIA/AFP/Getty Images

Libyan coast guard police help immigrants who were rescued at sea off the coast of Libya on Sunday.  MAHMUD TURKIA/AFP/Getty Images
Listen Now

Alongside its debt crisis, the European Union has been grappling with another major problem: unwanted migration. Last year, more than a million men, women and children — refugees and irregular, economic migrants — poured into the bloc, putting a big strain on public services and leading to the re-imposition of border controls between some of the member states. A deal between the EU and Turkey eventually reduced to a trickle the flow of incomers from the east, but the influx from North Africa is increasing, and with tragic consequences. Of the tens of thousands of migrants who reached Europe from the south after paying smugglers to get them across the Mediterranean, 4,500 perished in the attempt.

In a bid to stop this human traffic and save lives, the EU has now offered a second deal, this time with Libya.

The deal emerged from a recent summit of EU leaders in Malta and represents a new and controversial way of curbing migration. British Prime Minister Theresa May, who took part in the summit, described the initiative as “a comprehensive and coordinated approach to tackling one of the biggest challenges facing Europe.”

The leaders agreed to pour millions of euros into beefing up the Libyan coast guard to stop people smugglers and to step up search and rescue operations. But far more controversially, the EU also offered to set up and fund refugee camps in southern Libya where people who are trying to reach Europe could be held and have their asylum claims processed. Human rights groups are aghast.

“If Europe is admitting that it will struggle to meet the needs of refugees, how on earth can it expect a country, which barely has a functioning government, to do it?” asked Nick Dearden of the Global Justice campaign group.

“This is not about saving migrant lives. This is simply about giving some money — probably a lot of it will be taken from the aid budget — to keep people where they are and push that burden onto other countries,” he said.

The United Nations Human Rights Rapporteur has also entered the fray over the EU’s new deal. Professor Francois Crepeau accused the European Council of pandering to anti-immigrant feeling for political reasons in order to stave off any populist backlash in the upcoming general elections in the Netherlands, France and Germany this year.

No one at the European Council headquarters in Brussels was prepared to comment.