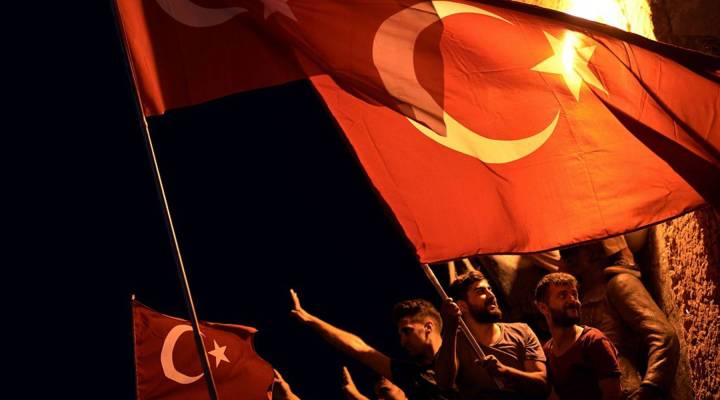 COPY
The European Union's deal with Turkey over migration could be in jeopardy in the aftermath of the country's recent attempted coup. RIS MESSINIS/AFP/Getty Images

The European Union's deal with Turkey over migration could be in jeopardy in the aftermath of the country's recent attempted coup. RIS MESSINIS/AFP/Getty Images
Listen Now

One of the casualties of last month’s failed coup in Turkey and its aftermath could be Ankara’s migration deal with the European Union. Turkish President Recep Teyyip Erdogan promise to cut the flow of hundreds thousands of refugees and migrants from Syria, Afghanistan, Iraq, Iran and other countries in the Middle East and Africa who were flooding across the Aegean Sea from Turkey to Greece.

In return,  the EU agreed to grant Turks visa-free travel throughout the 28 nation bloc but only if Turkey cleaned up its conduct on human rights.

The deal, which has cut the flow of migrants substantially, could now be at risk following the post-coup crackdown ordered by President Erdogan.

“Since the coup, at least 17,000 people have been arrested and tens of thousands have been suspended from their jobs,” said Michael Wohlgemuth of the Open Europe think tank in Berlin.

“This purge is pretty much the opposite of what Erdogan promised so I don’t see how this deal can survive.” he said.

The EU is expected to withdraw the offer of visa-free travel in October and the Turkish government has made it clear the whole deal would then collapse.  However, not everyone would be unhappy to see the EU disengaging from the Erdogan embrace.

The Turkish leader raised hackles by demanding the prosecution of a German satirist who broadcast a scurrilous poem about Erdogan; the German Chancellor Angela Merkel dismayed many Europeans by authorizing – in principle – the prosecution of the satirist under an antiquated German law.

“The migrant deal was ill-advised from the outset. It was a deal with a leader who was already backsliding on human rights and democracy before the post-coup purge,” said Rem Korteweg of the Centre for European Reform.

“The deal came about because of a mood of panic in Europe that these numbers of migrants and refugees coming across the Aegean was unsustainable. Something had to be done,” he said.

If the deal does collapse, Europe won’t necessarily face a new wave of refugees. There are now NATO patrols in the Aegean helping to deter people smugglers and many countries in the Balkans have closed their borders so that it is much more difficult for migrants to make their way overland from Greece to northern Europe where most of them want to settle.

But if the deal with Turkey falls by the wayside, it would be a setback.  Balkan countries -in the front line — are getting nervous. Bulgaria has just ordered another 20 miles of fencing.