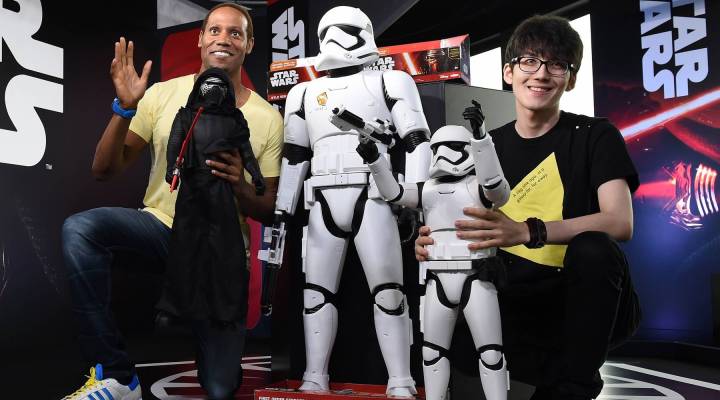 The merch is strong with this one

The merch is strong with this one

If you’re Disney, it’s not enough to make a movie anymore. Not by a long shot.

But Disney’s now-legendary merchandise machine is in overdrive this week. At midnight, Disney stores, Toys R Us, and Wal-Mart will open up to sell new merchandise and toys around the latest “Star Wars” movie, “The Force Awakens.”

Just to be clear, the movie doesn’t open for another three months.

But Disney — which bought Lucasfilm and the rights to “Star Wars” franchise for $4.1 billion in 2012 — wants this rollout to be an event all its own.

“What you have is a very popular long-running franchise, which has fans in just about all age groups, combined with a very, very savvy and professional marketer in Disney,” says Martin Brochstein, senior vice president of the International Licensing Industry Merchandisers’ Association.

He says toys might typically roll about four to six weeks before the movie. This longer lead will help Disney sell toys and promote the film too.

There’s also a global push to the launch that shows how important the international market is becoming for the franchise.

“If you look at a property like Transformers, more than half of the business in the last movie was done outside of North America,” says Sean McGowan, a managing director at Oppenheimer & Co. “I don’t know if you’d make that forecast for “Star Wars” yet, but ultimately there’s no reason why that wouldn’t be the case.”

McGowan believes the movie and all the products that go with it will be successful, but he also cautions that expectations from Wall Street, Disney, retailers and manufacturers are extremely high.