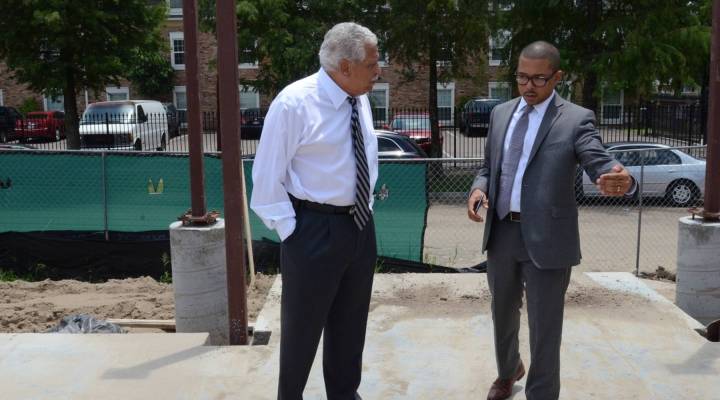 COPY
Alden McDonald, (left) President and CEO of Liberty Bank, walks the perimeter of a branch under construction in New Orleans' Gentilly neighborhood, with his son Todd McDonald, a Vice President of Strategic Management at Liberty. Caitlin Esch
10 years after Katrina

Alden McDonald, (left) President and CEO of Liberty Bank, walks the perimeter of a branch under construction in New Orleans' Gentilly neighborhood, with his son Todd McDonald, a Vice President of Strategic Management at Liberty. Caitlin Esch
Listen Now

Alden McDonald, the President and CEO of Liberty Bank, takes a pair of work boots from the trunk of his car and paces the perimeter of a branch that’s under construction in New Orleans’ Gentilly neighborhood. He lobs question after question at his contractors: what’s the square footage on the restrooms? Where will the tellers sit? Is it possible to remove one wall and add some open space? McDonald is nothing if not persistent. It’s a character trait that helped when Liberty faced its most trying time.

Back at Liberty’s headquarters, McDonald remembers how Hurricane Katrina, and the flooding that followed, nearly destroyed the bank. The roof of Liberty’s six story headquarters was ripped off during the storm; then the building was inundated from the ground up. Liberty’s customer base fled the city.  Bank records were destroyed. Displaced employees decided against moving home.

And yet, the year after the storm was the bank’s most profitable. McDonald says the cataclysmic circumstances helped Liberty identify redundancies.

“We had facilities that we didn’t reopen,” McDonald says. “We should have closed them before, but didn’t have the foresight. We were servicing communities. Those communities didn’t come back. So it offered us an opportunity to re-balance our expense levels.”

McDonald says he finally understood the importance of ATMs and online banking because so many Liberty customers needed to bank in other cities.

Liberty is New Orleans’ only African-American-owned bank. McDonald felt an added responsibility to his customer base in neighborhoods like Gentilly, which were struggling to rebuild. Today, in Gentilly, it’s hard to find someone who doesn’t know Liberty Bank.

Alicia Brookins is a Gentilly resident whose home was destroyed.  She says in the early days after the flood, everything was difficult. She was without a car or a cellphone. She struggled with separation from her son, who stayed in Texas after Katrina. She lived first with relatives and then in a FEMA trailer. At one point, her trailer was robbed. One small thing made life a little bit easier: when the insurance check for her home finally came, Liberty Bank was open for business.

“What I liked about them,” Brookins says, “whenever you came in [it was], ‘Hello, how you doing? Come on back, you need anything?’ That was a comfort. Because the big banks weren’t doing that.”

In the decade since Hurricane Katrina, Liberty Bank has grown. Alden McDonald says he realized that if it was possible to rebuild in New Orleans, the same should be true of disinvested inner-city communities in Detroit, Chicago and Kansas City, MO. Liberty now has branches in those cities, too.