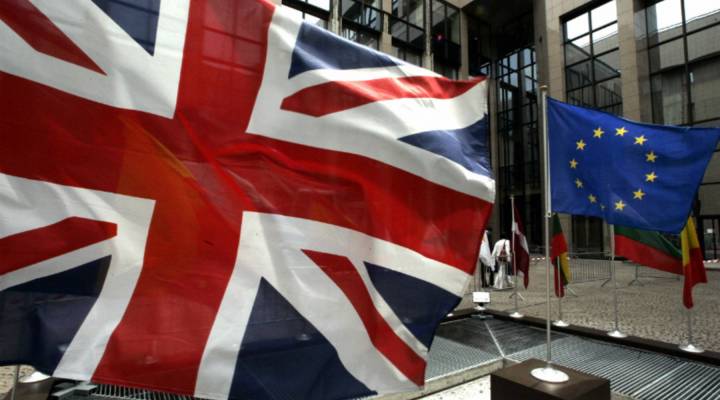 Exit Grexit, enter Brexit. Could the UK quit the EU?

COPY
Some in the U.K. want Britain to exit the European Union, whose flag, right, flies next to the Union Jack at EU headquarters in Brussels. Those Britons are angry about the EU's treatment of Greece. GERARD CERLES/AFP/Getty Images
Brexit

Exit Grexit, enter Brexit. Could the UK quit the EU?

Some in the U.K. want Britain to exit the European Union, whose flag, right, flies next to the Union Jack at EU headquarters in Brussels. Those Britons are angry about the EU's treatment of Greece. GERARD CERLES/AFP/Getty Images
Listen Now

A Greek exit from the eurozone has been averted – for now at least-  but another , even bigger crisis for the European Union  is still waiting in the wings:  not Grexit  but Brexit,  a British exit from the EU.

Over  the next 18 months the United Kingdom will attempt to negotiate an even looser arrangement with the EU than Britain currently enjoys   and then to hold a referendum asking the British people, “Do you want in or out?”

“Out” campaigners believe that the treatment of Greece has given their cause a major boost.

“The events in Greece have shown what the EU is doing to its member states, how badly it’s treating them and why it is important for nations to control their own destiny,” says Rory Broomfield of the Better Off Out campaign.

Broomfield directs the campaign from his headquarters on a former British warship moored in the Thames. He believes it’s an entirely appropriate headquarters. “Churchill  once said that if Britain faced a choice between Europe and the open sea, Britain would always choose the open sea,” says Broomfield. “And he was right. We want to face outwards, towards the United States and the rest of the world and not get bogged down in a stagnant, failing Europe.”

Opposition in Britain to EU membership stems traditionally from a conservative concern about the loss of national sovereignty. But after the turmoil over Greece, the British left is also beginning to voice skepticism about Europe on the grounds of social policy.

“The EU is supposed to be a caring, compassionate organization, but its treatment of the Greeks has been brutal,” says Graham Stringer, an opposition Labour member of Parliament. “The EU is dictatorial and deeply unpleasant, and many of my friends and colleagues in Parliament are now telling me they will vote against EU membership in the U.K. referendum.”

Stringer argues that the “harsh” treatment of the Greeks could help drive Britain towards an “out” vote.

But that’s not the message from the opinion polls. The “in” campaign still retains a clear lead, with a majority of Brits still believing that the benefits of being part of a large single European market outweigh the disadvantages. In reality – since Britain is not part of the eurozone and has opted out of a number of EU measures – many Brits seem to believe they are Better Off Half In and Half Out.

Better off with the best of both worlds: Europe and the open sea.