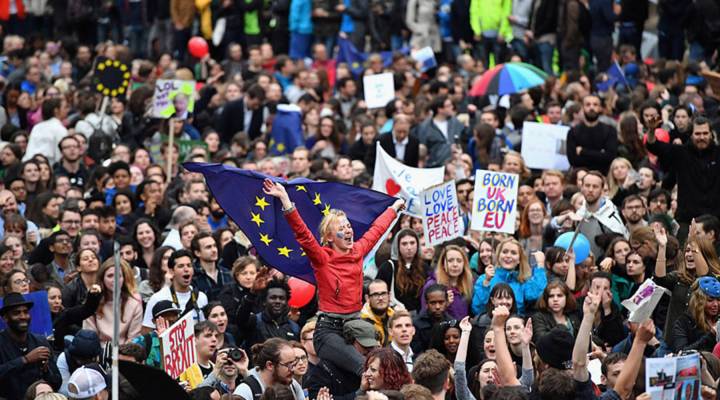 COPY
Protesters demonstrate against the referendum to quit the EU outside the Houses of Parliament on June 28, 2016, in London. Jeff J Mitchell/Getty Images

Protesters demonstrate against the referendum to quit the EU outside the Houses of Parliament on June 28, 2016, in London. Jeff J Mitchell/Getty Images
Listen Now

Britain’s Brexit blues continue. A Bank of England report has forecast that 75,000 jobs could be lost in United Kingdom financial services after the departure from the European Union. And the nation’s top five business organizations warn that jobs and investment will be at risk unless a so-called “transition deal,” delaying and smoothing the exit from the bloc, is agreed to by Christmas. Such an agreement, within that time frame, seems unlikely.

The Brits voted 52 percent to 48 percent in a referendum last year to quit the EU. But as the economic worries mount, perhaps it is time to ask: Are the Brits losing their enthusiasm for Brexit? Might they call the whole thing off?

“Yes,” insisted pro-EU campaigner Steven Bray, standing outside the British Parliament, waving two big European flags and shouting “Stop Brexit!” at people passing by. Bray told Marketplace that he believes the process of leaving the bloc is reversible because “most of our European partners do not want us to leave, and I think most British people now don’t want to leave either,” he said.

The talks about the terms of Britain’s departure from the EU have certainly not been going well; they are now stalled over the issue of how much the country should pay to settle its obligations to the bloc. The cabinet is divided over the future trading relationship it would like to secure with Britain’s European partners, and British ministers frequently contradict each other on the subject.

“It’s pretty clear that the British people should be given another referendum,” said opposition lawmaker Tom Brake, Brexit spokesman for the pro-European Liberal Democrat party.

Is Britain having second thoughts about Brexit? And if it fails to secure a satisfactory exit deal, could it call the whole thing off?

“I think it’s possible but unlikely,” said John Springford of the pro-Europe Centre for European Reform.

“If we were going to reverse Brexit without a huge backlash, there would have to be quite a significant shift in public opinion. But we’ve had lots and lots of opinion polls, and they all produce a similar result as last year’s referendum: about fifty-fifty,” Springford said.

Donald Tusk, president of the European Council, the EU’s supreme policy-setting body, has hinted at a news conference that he and other EU leaders would like to see Brexit reversed, while indicating that this was a wistful hope rather than a clear expectation. Quoting the John Lennon song “Imagine,” Tusk said: