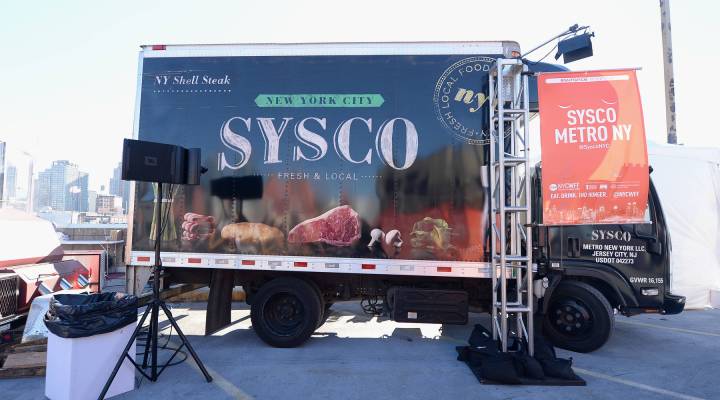 COPY
A Sysco truck was on display in New York City. The FTC worries a merger with U.S. Foods would create a monopoly in the food distribution market. Gustavo Caballero/Getty Images for NYCWFF

A Sysco truck was on display in New York City. The FTC worries a merger with U.S. Foods would create a monopoly in the food distribution market. Gustavo Caballero/Getty Images for NYCWFF
Listen Now

A federal judge has halted a proposed merger between Sysco and US Foods.

The deal is being held up for antitrust review under the concern that a merger between the country’s two largest food distribution companies might lead to higher prices.

Sysco and US Foods aren’t exactly household names, yet they are responsible for a good deal of the food we eat; distributing food products to restaurants, schools, hospitals and hotels across the country.

The Federal Trade Commission alleged the merger would create a near monopoly in the food distribution industry.

Bob Goldin is the executive vice president with the food industry researcher Technomic. Its clients include Sysco. Goldin says there are still plenty of alternatives restaurants could use besides Sysco and US Foods in virtually every market. “By our count, there is (sic) about 1,500 distributors,” he says.

Sysco had sought to appease the court’s anti-trust concerns by selling off assets to another competitor, Performance Food Group.

“That divestiture wasn’t sufficient to restore the competition that would be lost by the acquisition,” says anti-trust attorney Andre Barlow, of the firm Doyle, Barlow and Mazard. He says this ruling is just the latest in a string of cases that prove that the FTC and DOJ will step in to break up mergers they feel are anti-competitive.

“This is another indication that the Federal Trade Commission has the capability to litigate and win at trial,” he says.

Barlow says this case may still move forward, but that he would bet against the chances the merger would be approved in a higher court.