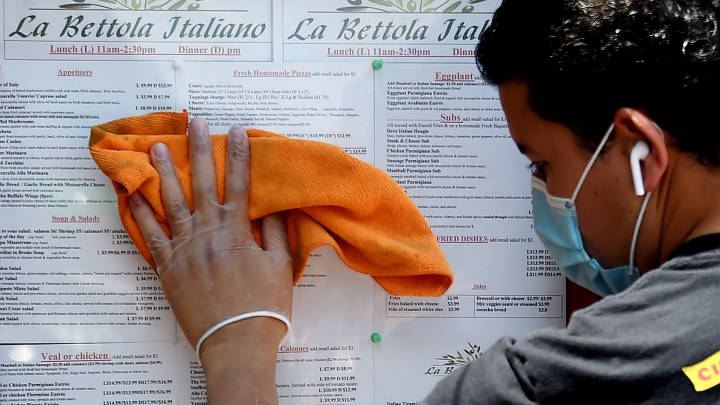 COPY
An employee cleans the posted menu of a reopened Virginia restaurant. Menus have downsized as the industry's revenue declined. Olivier Douliery/AFP via Getty Images
COVID-19

An employee cleans the posted menu of a reopened Virginia restaurant. Menus have downsized as the industry's revenue declined. Olivier Douliery/AFP via Getty Images
Listen Now

The COVID-19 pandemic and stay-at-home orders meant to keep the virus under control have hit the restaurant industry harder than almost any other. Many restaurants have scaled back their menus over the past couple of months, and those changes may be here to stay.

What a restaurant offers on its menu is a simple issue of arithmetic, according to Christopher Muller, professor of the practice at Boston University’s School of Hospitality Administration.

But there weren’t a lot of guests under stay-at-home orders, so restaurants scaled back what they offered. Red Robin recently announced it was dropping more than 50 menu items for good. Muller said the real losers will be restaurant suppliers.

“For the vast majority of businesses, they have been buying from a handful of distributors,” he said.

Companies like US Foods and Sysco, which are like Amazon for the restaurant industry. Muller said those companies have lost between 75% and 90% of their business this year.

Alex Susskind, a professor of food and beverage management at Cornell University, said scaling back menus will take some pressure off restaurants so they can adapt to new social distance guidelines.

“It just kind of provides an opportunity for the restaurant operators to kind of reset, and it’s hard to do that when you’re in business, day in and day out doing stuff,” Susskind said.

“Items that are really top sellers that are low-cost to produce. So things like burgers and pizzas and pastas,” Topper said.

Lockdown also let restaurants drop items that only do well in a handful of markets, according to John Quelch, dean at the University of Miami’s business school.

“The proliferation of those specialty local items over time will add complexity to supply chains,” he said.

The National Restaurant Association said eateries have lost $120 billion in sales in the last three months.