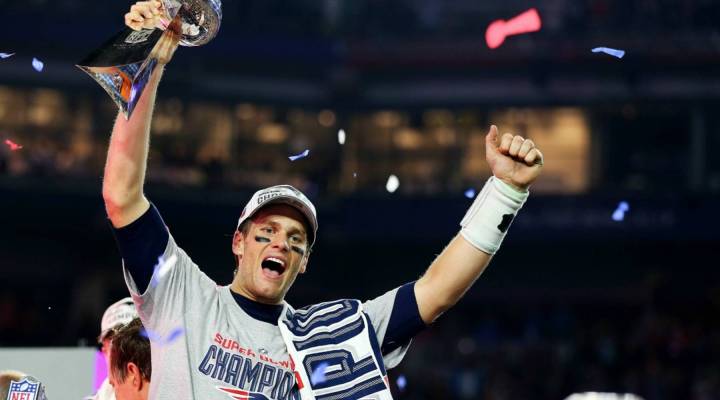 Listener Danielle Addleman from Novato, California, has always wondered about how major league sports teams get T-shirts that declare them the champions immediately after they win.

To figure out how the winning team gets their hands on those T-shirts so quickly, I wanted to understand just what it takes to make one of these commemorative tees. So I visited a screen-printing company called AKT Enterprises in Pomona, California. The warehouse, where T-shirts are printed and packaged, was warm and smelled like ink.

AKT’s head of West Coast operations, Robert Pfeffer, gave me a tour. He told me about the different variables that go into the T-shirt making business, “type of garment, color of garment, locations, size of artwork, the different colors that are going into the print and the type of inks that are used.”

The longest part of the process is figuring out what the client wants. For example, if you needed shirts for your kid’s entire little league team, “standard screen printing is probably anywhere between a 7- to 10-day process,” Pfeffer says. “To get garments ordered, get everything here, get your artwork approved, and then to actually have it printed and shipped out to you.”

But when the client is an entire football league? The planning starts before the season does.

Jim Pisani, president of Majestic Athletic, has an entire team dedicated to championship events for the major league sports and the NCAA.

“They plan about six months out for each event, from the product, the T-shirts and the fleece that are going to be used, to working on designs with each one of the leagues,” Pisani says. “During what we call the ‘hot market’ – whether it’s the Super Bowl, the World Series or the Stanley Cup championship – we do what’s called ‘locker room T-shirts.’”

Those locker room T-shirts are the ones you saw the Patriots wearing after the Super Bowl, and that you can buy right away at the stadium. Every year, shirts are printed for both teams before the final game and are kept in closely guarded boxes behind the scenes. The second the clock expires, workers take the winner’s shirts onto the field and give them to the new champions. And just like that – instant marketing for the same T-shirts that will be in stores the next morning.

However, Pisani says, most championship T-shirts that you can buy in stores the next day are printed right after the game.

“That’s when we’ll really kick into gear. We’ll have product ready within less than 24 hours, sometimes within two to three hours depending on where the location is,” Pisani says.

Manufactures and retailers pre-position thousands of blank shirts, jackets and hats at printing facilities all over the country. As teams are eliminated in the playoffs, so are the screen-printers that were hired in their region. So, when the Super Bowl’s game clock was running out, the T-shirt print workers in Seattle and in New England run in and wait for the count – to start up the T-shirt press.

“The actual printing, once the order is taken, the stencil is made, and everything is set up – it probably takes anywhere between 10 to 15 seconds,” Pfeffer says.

Depending on the complexity of the design, T-shirt printers move pretty fast. “I’ve seen numbers upward over 600 an hour and as few as 200 an hour,” Pfeffer says.

Big orders like these might require the winner’s T-shirt print shop to run for at least 18 hours and bring in a second shift. The shops hired to print the losing team’s gear just go home.

What’s going to happen to the pre-printed shirts that say the Seahawks won the Super Bowl? Twenty years ago they would have been destroyed, but the leagues and retailers now partner with nonprofit organizations and donate the clothing to Third World countries.

The only condition the league sets with these organizations is that the licensed apparel never makes it way to the U.S. market, says Beau Stephens, senior vice president of university business at Navigate, an investment analysis firm that specializes in sports and entertainment.

“I think they take it very seriously because it’s additional revenue. They fiercely protect it in that they don’t want misprinted merchandise on the streets either,” Stephens says.

The majority of the donated gear comes from retailers. “On average, the typical amount is probably somewhere in the $2 million range that goes overseas,” he says.

Which means there’s a strange bright side to blowing the big game. Sure – the Patriots made its hometown fans happy, but the Seahawks will get new fans all over the world.