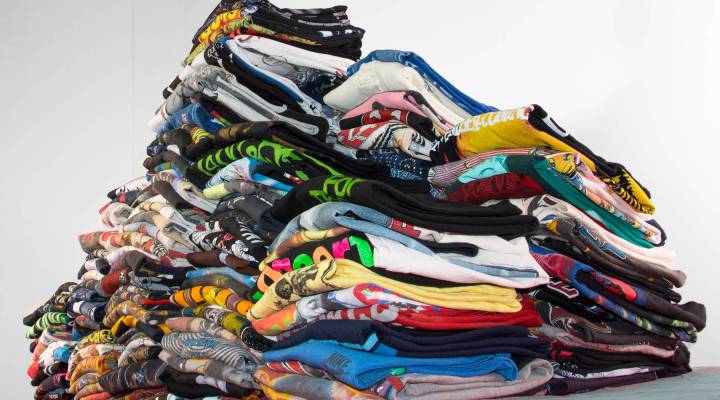 Can you put a price on nostalgia? For some people, that’s their business. And business is good.

“Last year, we grew about 150 percent over the previous year,” said Patrick Klima, owner of WyCo Vintage. “This year we’re about the same.” He’s talking about the vintage rock T-shirt market. In recent years, prices for rock tees, specifically ’90s bands, have skyrocketed. Band T-shirts from the era of baggy flannel button ups and light wash denim jeans were, until recently, an easy $20 to $50 find. In the past few years, demand has driven prices for those same shirts into the hundreds and thousands of dollars. Think Nirvana, The Jesus and Mary Chain, Red Hot Chili Peppers, Smashing Pumpkins — grunge and guitar rock bands from the ’90s.

The popularity of images from the past has been largely driven by today’s celebrity fashion.

“You’ve got Justin Bieber wearing a Nirvana shirt,” said James Applegath, creator of Defunkd.com, an online vintage T-shirt community. “A bunch of 18 to 25 year olds all of a sudden think that’s cool.”

In the past couple of years, original Nirvana shirts went from being a pretty common $50 find on Ebay, to creeping up in price to hundreds and even thousands of dollars.

“Most of the ’90s stuff is really coming on strong,” Applegath said. “It got driven so hard by celebrity.”

The Bieber-Nirvana example isn’t an isolated incident. In his visual album “Endless,” Frank Ocean sported a shirt from alternative rock band The Jesus and Mary Chain. Kanye West has been seen wearing shirts from iconic shoegaze band My Bloody Valentine to goth metal band Type O Negative. In each instance, those shirts shot up in demand — even from people who may have never heard the band before.

“You certainly don’t have to be a fan of the band, I guess, is part of the trend,” Klima said. “[People think] how can I stand apart from somebody trying to flex with that shirt? I think it kind of gets out of control for some people.”

It’s not just the price of vintage T-shirts that have changed in recent years. The internet has revolutionized how celebrities, collectors and fans access shirts.

“We sell 99.9 percent of all our shirts through our website,” Klima said.

So what gives vintage T-shirts an appeal not found in other collectibles like comic books or baseball cards? Fans and collectors can wear it out, Klima said. It’s as much a fashion statement as it is an homage to a musical group.

Then there’s also the issue of the shirt’s quality. In 1994 the North American Free Trade Agreement or NAFTA took effect. Prior to NAFTA, T-shirts with printed images were made in the U.S. Since then, common shirts’ fabric blends and cut have changed.

“Today, a lot of the shirts you get there are always printed on these 100 percent cotton shirts,” Klima said. “They look like they’d fit a Lego person, they’re all boxy. They’re not quality.”

And then there’s another market factor, too — death.

Whenever an artist passes away, regardless of the popularity of the era they come from, there’s a run on their shirts. There’s a spike in popularity — and the shirts seem to almost disappear.

“I remember the morning that Bowie passed away,” Klima said. “You know you look at your phone when you wake up and I have all of these notifications that David Bowie shirts had sold and I was immediately like ‘Oh no….'”

As more and more people become aware that these shirts are worth money, people are digging them out and looking for them more than ever.

So if you regret throwing away any old shirts, don’t worry. You’re not alone.

We all want the vintage Apple sneakers, but none of us can afford them