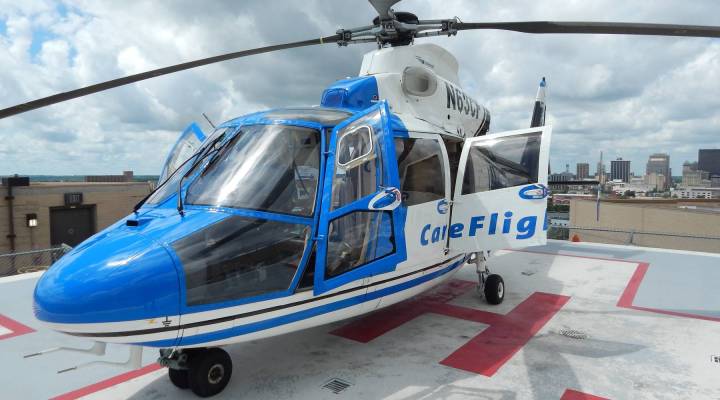 ERs are still busy, Affordable Care Act and all

COPY
Premier Health's CareFlight emergency helicopter on the roof of Miami Valley Hospital in Dayton, Ohio. Transportation is one of the many expenses associated with emergency care. Lewis Wallace

ERs are still busy, Affordable Care Act and all

Premier Health's CareFlight emergency helicopter on the roof of Miami Valley Hospital in Dayton, Ohio. Transportation is one of the many expenses associated with emergency care. Lewis Wallace
Listen Now

One of the arguments in favor of the Affordable Care Act was that it would reduce dependency on emergency rooms by covering more people with basic preventive care. Now, millions of people are newly covered by Obamacare. So are emergency departments seeing a slowdown?

On the street in downtown Dayton, Ohio, Rebekah Jacobsen says before the Affordable Care Act, she racked up thousands in medical bills.

“I didn’t have health care. I didn’t have anything,” she says. Now, she’s on Medicaid, the health insurance program for low-income people. Ohio’s one of the 27 states that expanded their program with federal funds available under the new law. But Jacobsen was in the emergency room just last month—admittedly not for the most serious problem.

“I thought I had lice, and I didn’t,” she says. Her head was itching, and it turned out to be dandruff.

An ER visit for dandruff  is just the kind of situation some people will point to as burdening the whole system. Jacobsen says she would have gone to a regular doctor to see if she had lice, but it was the middle of the night. With her new insurance, the ER trip didn’t cost her anything.

Up the road at Miami Valley Hospital, Dr. Darin Pangalangan, an emergency doctor and head of the Emergency and Trauma Institute for Premier Health, says he thinks people should be able to use the ER when they need to – or even just think they need to.

“You cannot go to your family doctor at midnight. They’re not open at midnight,” he says. He says it’s not an abuse of the system to access an ER if you think you may have a problem, and you can’t get in to see a regular doctor. What’s more, emergency doctors are bound by law to help anyone who comes in the door— regardless of their ability to pay —to at least investigate to see if they have a serious problem. Most people who walk through the doors come in with problems that need immediate attention.

The still-looming Obamacare question though, is this: Will people actually depend on ERs less for basic care once they’re insured, driving costs down for everyone? Or will more people, like Rebekah Jacobsen, go to the ER because, well, now they can?

“The cost of going to the emergency department might be a major deterrent for the uninsured,” says Katherine Baicker, a Harvard health economist who worked on a study of new Medicaid recipients in Oregon. She found that people who got on Medicaid then went to the ER more. “Once they have access to insurance, they can go to the emergency department without being concerned about being presented with an enormous bill at the end.”

Howard Mell, a spokesman for the American College of Emergency Physicians, says many of his members are seeing increased traffic, though ER visits were already on the rise.

“Most emergency departments have actually seen an increase in the amount of people coming through the door,” Mell says. “It’s not a huge increase, but it’s certainly noticeable.”

But the experts don’t all agree: another study in Massachusetts found expanding to near-universal health coverage led to fewer people using emergency rooms in cases when it wasn’t really an emergency. And still another study looking at Medicaid recipients in Ohio found that expanded Medicaid coverage could help reduce ER visits and increase the use of primary care. Doctors at MetroHealth, the county hospital at the center of that study, say integrating patients into a “patient-centered medical home” model of care helps keep people focused on primary and preventive care, and makes them less likely to show up at an ER when they don’t need to.

Overall, the jury is still out—some 13 million people are just now settling into having health insurance, either through Medicaid or the ACA exchanges. It’s not clear yet how all those people might use the ER differently, and what strategies providers might use to cut costs to the overall system. Regardless, one recent study found emergency rooms in the United States are generally profitable, and predicted a rise in revenues and profit margins for ERs as more people get covered.

Still, emergency care is an expensive way to get help to people who don’t have immediate, severe conditions, which is why health networks like Premier in Dayton are trying to offer alternatives. Kathryn Lorenz is a doctor at what’s called an “after hours clinic” in Troy, Ohio—they’re open from 5 to 9 p.m. weekdays, and offer weekend hours.

“You can walk in up to the last minute and we would see you,” says Lorenz. The clinic helps folks who can’t get a quick appointment with a family doctor for something acute like back pain, poison ivy or lice. It’s a less costly option than an ER, but Lorenz also says there are things she can’t do for patients here. “A lot of times I’m wrestling them to go to the ER, and telling them, ‘yes, you must pay your co-pay and get in there because you have a life-threatening illness.’”

It’s not like most people are in a huge rush to go to an emergency room. Take Dayton resident Roberta Gilliam. She says she recently got Medicaid, and she’s been taking advantage of it by getting preventive care, not by going to the ER.

“I’ve had my pap smear, I’ve had my mammograms, I’ve had my dentures, my X-rays, I’m getting ready to get a partial,” she says. “It’s been a blessing.”

“When anybody can get insurance, you know they’re happy to have insurance,” she says. “Especially the ones that can’t afford insurance.”

Emergency care is really just one small piece of the puzzle: more people getting coverage is likely to mean more use of all kinds of health services. The basic economic principle is, when something becomes cheaper for people, they use more of it.