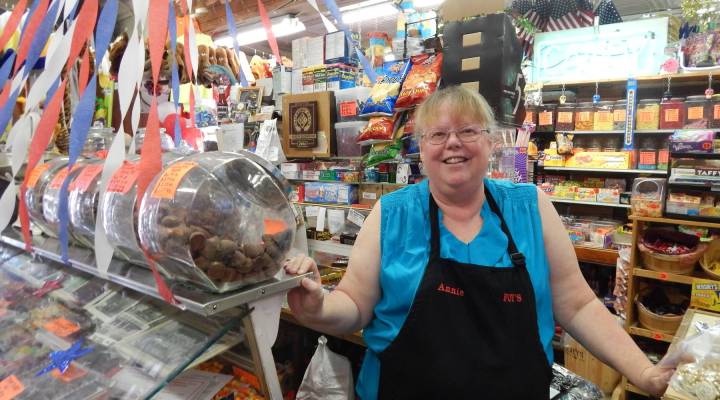 The lowdown on employee discounts

COPY
Annie Chapman has worked at Foy's Halloween and Variety in Fairborn, Ohio for ten years. She says she uses her employee discount all the time. Lewis Wallace

The lowdown on employee discounts

Annie Chapman has worked at Foy's Halloween and Variety in Fairborn, Ohio for ten years. She says she uses her employee discount all the time. Lewis Wallace
Listen Now

What if everything in your favorite store was 30 percent off — or even 10 percent off — every single day? Well, in theory, that’s what the employee discount is about. You work somewhere, you love the stuff, you buy the stuff. Apple, J-Crew, and Barnes and Noble are just a few of the retailers known for offering good deals to their workers. And almost all stores offer some kind of discount.

Annie Chapman has worked at Foy’s Halloween and Variety in Fairborn, Ohio for ten years.

“We do all the seasons. Like right now we’re on fourth of July, and of course the next big one’s Halloween,” she says, pointing to aisles and aisles of knick-knacks, costumes, and decorations. Most of what’s on the shelves is 20 percent off for her.

Chapman says she uses her discount all the time: “There’s always something we’re buying. There’s a lot of holidays.”

She says although the discount is nice, it’s just a perk — and that’s where this store is different than some shops.

“I know a lot of folks who take jobs, in especially apparel, largely because of the discount,” says Lance Thornswood, a retail consultant. He says stores want employees with brand loyalty. And 20 or 30 percent off at your favorite store can be big. Thornswood says even the ten percent discount offered by a lot of big-boxes isn’t just a token amount. He remembers when he used to work for Target.

“I have been a huge Target shopper, you know, like…almost sick,” he says. “Five times a week I’ll be in a Target store.”

Do the math, and it was hundreds of dollars saved. But he says in some cases, a benefit like ten percent off all your groceries still might not add up.

“Low pay pretty much negates everything else,” he says.

Zeynep Ton, an MIT professor and author, agrees that decent wages and benefits are far more important to recruitment and moralethan discounts. But she says when wages are low, discounts may at the very least have an offsetting effect.

“They could really make the difference between whether somebody could afford their supermarket shopping or not,” she says.

Some of the most attention-grabbing deals are at places like Best Buy, where employees can shop at wholesale cost plus 5 percent, and Victoria’s Secret, where workers report getting 30 percent off. At the other end of the scale is Home Depot, which offers no discount. In an e-mail, a Home Depot rep says simply that the company is trying to keep prices low for everyone.

Whole Foods is somewhere in the middle, and gives a better discount than most chain groceries. Everyone gets at least 20 percent off, and participants in a voluntary health program can get up to 30 percent.

“If we did away with our discount, that would be a major issue with morale,” says Mark Ehrnstein, global vice president of team member services for Whole Foods. He says Whole Foods actually uses the discount as part of its recruitment process, and it often hires people who already shop at the store.

But he’s also quick to note that Whole Foods’ lowest wage in any state is $10, and the average wage is far above minimum wages in most states; a discount complements, rather than makes up for, wages and other benefits.

Which brings us to a somewhat more cynical theory on the employee discount: that maybe it just convinces workers to buy more from their employers. That’s what Ethan Wintrow thinks. He sells guitars, amps and strings at Absolute Music in Fairborn, Ohio.

“Everyday I come in here and we get something and I’m like, oh, technically I can afford that,” Wintrow says. “But in the long term, it would be a poor decision.”

He’s making just enough to save up a little. But as a musician, he works in a land of temptation.

“You get used to it after a while, being around everything and knowing that you can’t have any of it,” he says.

Because — Public Service Announcement for all you discount hounds — a markdown only really saves you money on things you were going to buy anyway.