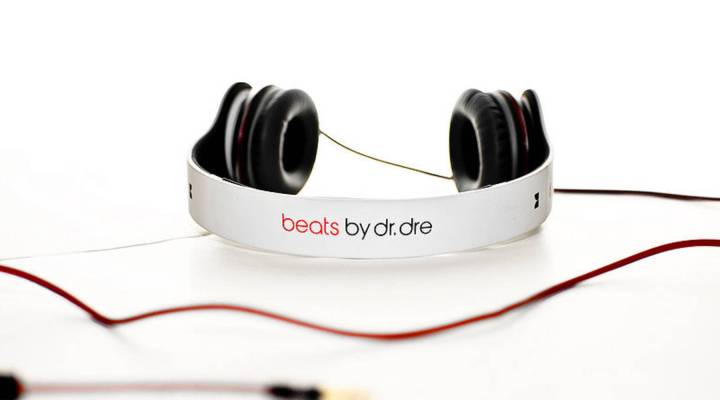 Why Apple would want to buy Beats

COPY
The image illustrates the White Solo Beats by Dr. Dre. Apple is allegedly in talks to purchase Beats eletronics- an acquisition that would cost a reported $3.2 billion. Matthew Raymundo/ Via Wikimedia Commons

Why Apple would want to buy Beats

The image illustrates the White Solo Beats by Dr. Dre. Apple is allegedly in talks to purchase Beats eletronics- an acquisition that would cost a reported $3.2 billion. Matthew Raymundo/ Via Wikimedia Commons
Listen Now

Apple CEO Tim Cook recently said the company was going to go on a shopping spree and now it looks like the company is making good on that. Apple has reportedly made a bid to buy Beats Electronics for $3.2 billion. Beats was started by Rapper Andre “Dr. Dre” Young in 2008. It’s best known for its headphones: they’re colorful, stylish and cost about $200.

Not everyone agrees. “They certainly don’t need the headphone company, which makes second rate headphones based on marketing,” says music industry analyst Bob Lefsetz. He thinks Apple would be a lot more interested in Beats’ music streaming service. Steve Jobs famously opposed the subscription music model and, instead, championed iTunes’ current model, where you buy a song outright.

“The paradigm is shifting as I speak,” says Lefsetz. “Apple iTunes sales are down, streaming revenue is up. Apple caught flat-footed, they’re trying to solve this problem by buying Beats.”

But Apple doesn’t need to buy its way in to the streaming business says James McQuivey, a media and technology analyst at Forrester Research. “The subscription business is something Apple could have done by lifting a finger at any point during its history,” says McQuivey. “This is not a unique skill set, industry relationship, technology, none of that.”

McQuivey thinks the possible Beats buy would likely be part of a larger strategy. After all, Apple is sitting on $151 billion in cash and its shopping spree has just begun.