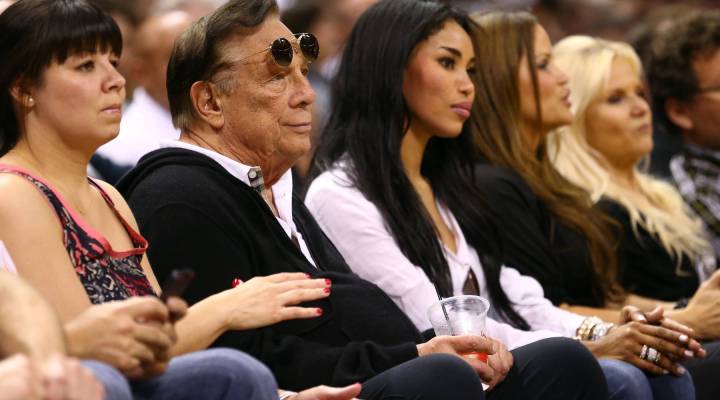 COPY
Team owner Donald Sterling of the Los Angeles Clippers watches the San Antonio Spurs play against the Memphis Grizzlies during Game One of the Western Conference Finals of the 2013 NBA Playoffs at AT&amp;T Center on May 19, 2013 in San Antonio, Texas. Ronald Martinez/Getty Images

Team owner Donald Sterling of the Los Angeles Clippers watches the San Antonio Spurs play against the Memphis Grizzlies during Game One of the Western Conference Finals of the 2013 NBA Playoffs at AT&amp;T Center on May 19, 2013 in San Antonio, Texas. Ronald Martinez/Getty Images
Listen Now

At a press conference, NBA Commissioner Adam Silver confirmed that Sterling’s voice was heard making racist comments. He said the financial impact on the Clippers franchise is yet to be seen. Several sponsors have already withdrawn support.

“I’m outraged and I understand other people are outraged,” Silver said.

As an NBA owner, Donald Sterling is a franchisee, but his influence is far greater than that of his counterparts in, for example, the fast food business.

Typically, in a franchisor-franchisee relationship, it is the franchisor that holds most of the power. Jill Pilgrim, a sports attorney and business consultant, says sports franchises like the NBA “do a little twist on that general concept.” In the case of the NBA, Pilgrim explains, team owners decided collectively to coordinate their business operations.

“The owners are like members of a club,” Pilgrim said. “They are a club who have a common business interest in the development of sports, but also revenue generation.”

NBA Commissioner Adam Silver will use the NBA’s bylaws and constitution to determine if – and how – Sterling is to be punished. Those documents aren’t public, but Jill Pilgrim says the constitution probably includes a morals clause that forbids an owner from doing anything that might hurt revenue.

“There is no doubt,” Pilgrim said, “however that provision is worded, that this has definitely hurt the brand of the NBA.”

If an investigation shows the tapes to be authentic, Sterling could face at least a fine, and, at most, a suspension.

“A fine would likely be $500,000 or a million dollars,” said Michael McCann, director of the Sports and Entertainment Law Institute at the University of New Hampshire School of Law. “That would be a significant move for many, but Donald Sterling is reportedly worth $1.9 billion, so a fine of $1 million…wouldn’t send as strong a signal as the NBA likely wants to send.”

If Sterling is suspended, McCann said, the owner would be prevented from having any contact with Clippers players or coaching staff. “It would really be like a restraining order from his own team,” McCann said. “And the thinking is that during that time he would try to sell the team.”

That the 30 NBA owners, including Sterling, appoint the commissioner who is charged with investigating and handing down punishment, raises questions about just how independent Silver can be.

Gabe Feldman, director of the Sports Law Program at Tulane Law School, says NBA owners make a tremendous financial investments in their teams, and those investments appreciate over time.

“Even if the other 29 owners here are unhappy with what Donald Sterling has said, and how it impacts the value of their franchise,” said Feldman, “they don’t want, down the road, someone to say, ‘well, we don’t like what you said, so we’re going to take your franchise from you.'”