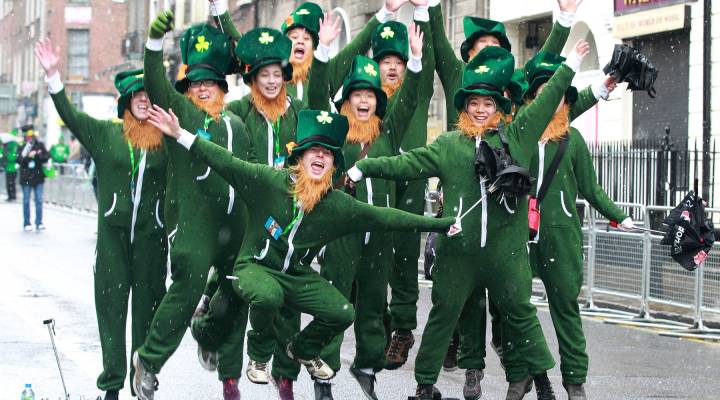 This probably doesn’t come as a huge shock, but St. Patrick’s Day is a big day for beer and spirits companies.  Guinness, that most Irish of beers, sells six times the amount of beer it normally sells on St. Patrick’s Day (3.5 million pints of beer sold, versus around 600,000 on other days), even as the company pulled out of sponsoring the New York St. Patrick’s Day Parade on Sunday due to the limitation of LGBT participation.

Meanwhile, Samuel Adams is expected to see their sales jump 13 percent this week, even as its parent company, Boston Beer, also pulled sponsorship out of the South Boston Parade. All told, beer companies are expected to take in around $245 million today, according to IBISWorld, though the impact of sponsorship decisions isn’t yet known.

What we pay to drink

More than 133 million Americans celebrate SPD with beer–which probably makes not drinking beer on SPD unpatriotic. Though, you should expect to pay a little more than normal for your St. Patrick’s Day suds. Especially if you’re a man. Men give out more green than women on this day, according to Mint.com. The average man spends more than $42 on St. Patrick’s day and the average woman spends around $28.

Can you guess which beer is the most popular in the U.S.? Actually, you probably can. It’s Bud Light (#spoileralert).

What we’re doing about how much we pay to drink

In related news, I was excited to see the people in my native city of Boise, Idaho taking a strong stand against beer price gouging. At the ice hockey arena for our local team, The Steelheads, fans sued when they found out that a $7 “large” beer (served in a tall, skinny cup) actually holds the same amount of liquid as the $4 “small” beer. The lesson? Do not mess with an Idahoan’s beer. The suit exceeds $10,000–I’m thinking a lot of that will have to do with emotional damages.