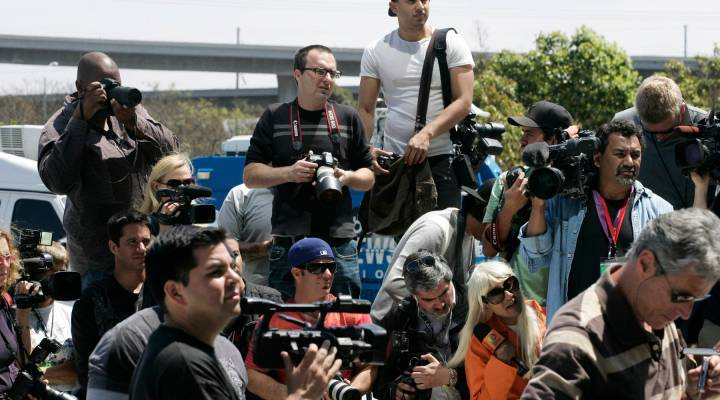 You Hate My Job

Paparazzi photographer caught in the act!

Giles Harrison (back, far left) with a group of paparazzi photographers. Giles Harrison/London Entertainment Group
You Hate My Job

Paparazzi photographer caught in the act!

Giles Harrison has been a celebrity photographer for 17 years. He studied journalism at California State Northridge before dipping his toe into the paparazzi life. He is now the founder and head of London Entertainment Group, a photo agency that has photographers in New York, Miami, Las Vegas, Jamaica, London, Philadelphia, Canada and France. The company syndicates over 1,000 images each month.

We followed him around for our series, “You Hate My Job“.  Here’s what he told us about the biz:

11 things we learned from Harrison:

1)    Paparazzi photographers love Jamba Juice. Jamba Juice is like a light bulb to a moth for celebrities, so Harrison often scopes them out. He also jokes that celebrities whose photos aren’t worth much are colloquially referred to as “Jamba Juice money” in the paparazzi biz (looking at you, Zach Galifianakis.)

2)    Dylan McDermott works out in jeans. (Watch the video above for proof!)

3)    Kanye West believes paparazzi photographers are better seen than heard. In fact, he’d prefer neither: “Kanye West comes over to the photographers and says, ‘You know what? Don’t speak to me now, don’t speak to me ever,’” Harrison says. “Well, I’m sorry, that’s not the way of the world. You can’t sit there and order everybody, ‘Don’t say a word to me ever.’ It doesn’t work like that.”

4)    Obviously, a parazzi photographer can make good money. Why else would they do it? But we didn’t know how much. Harrison says he makes something in the range of “high six figures” running his agency.

5)    It’s not all about the big shot — it’s about sets of photos. Harrison says he made over $150,000 on a series he took of Prince Harry outside of a Venice Beach restaurant. It was just after those naked pictures of him partying came out. Harrison keeps the rights to his photos, and can sell them to different publications for years. He’s made up to $250,000 on one set.

6)    New York and L.A. paparazzi have a coastal beef. “New York is a whole different thing, because celebrities can’t get away from it,” Harrison says they all get a bad name, “when you have the New York paparazzi calling Suri Cruise a brat because she doesn’t want her photo taken.”

7)    The paparazzi minor leagues can be tough. “When I first started in this business, I was making $50 a day and 25 percent commission. To make matters worse, that $50 was being taken out of my commission,” Harrison says. “Then I got to the point where I was making more money than I could spend, and I used that to hire other photographers.”

8)    Some paparazzi photographers have their own agents. Harrison has one. The agent negotiates all of the deals for Harrison’s pictures and keeps a cut. That way, Harrison is able to focus on what he really loves – being a “field op.”

9)    A picture of Kim Kardashian in a bathing suit can make you almost twice as much as most Americans earn in a year. Harrison says $80,000, easy, for one magazine cover.

10)  Some celebrities love the paparazzi (even if they pretend to hate them). “Paris Hilton will tweet the paparazzi when she’s going to be somewhere,” Harrison says. And according to him, she’s far from alone. “Yesterday, Joanna Krupa from Real Housewives of Miami and Gretchen Rossi from Real Housewives of Orange County were going to a restaurant in Beverly Hills and the photographers were waiting… because they told the photographers what time they were going to be there. Celebrities who do that have no right to complain because they are complicit to what’s going on.”

There’s so much more, I just want to reveal all of it. Watch the video above for the EXCLUSIVE, BEHIND THE SCENES LOOK!

What sex workers and surfers can teach us about risk management

You Hate My Job
Tags in this Story
Share this Story