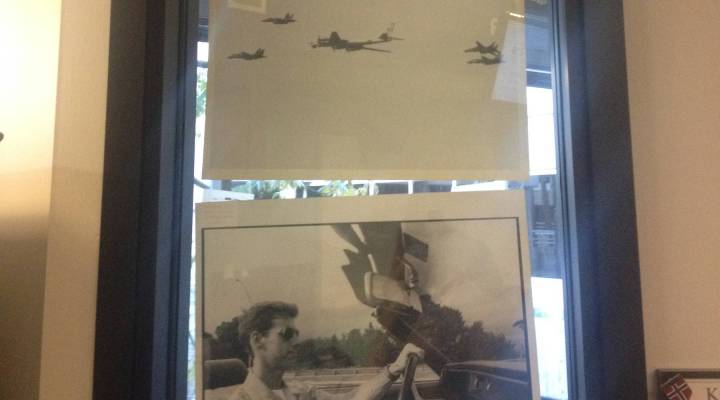 Kai Ryssdal on flying in the Cold War

COPY
Marketplace host Kai Ryssdal keeps a picture from his military days in the Cold War on his office window. Marketplace
The new Cold War?

Kai Ryssdal on flying in the Cold War

Marketplace host Kai Ryssdal keeps a picture from his military days in the Cold War on his office window. Marketplace
Listen Now

I dug a picture out of my garage yesterday, back from when I was in the Navy. I flew off the aircraft carrier USS Theodore Roosevelt. We used to get sent up to the north coast of Norway.

This was the mid-80s: the days of Ronald Reagan and the Evil Empire. We’d go up there, launch off the boat in the middle of the night, and go looking for Soviet nuclear bombers: Tupolev-95 Bears, to be precise.

They’d come out of the Soviet air bases in Murmansk, fly around the North Cape of Norway, down past Iceand and the UK, on the way to their launch orbits. The spot where they’d make their nuclear bombing runs on the east coast of the US.

And our job was to keep an eye on them. Make sure they knew that we knew they were there.

That picture is from October, 1988. One of the intercepts I ran. A Soviet strategic bomber, with a big red star on its tail and everything, surrounded by four Navy jets, somewhere over a really cold and gray North Atlantic Ocean.

We are, obviously, a long way from that. It’s different this time.

But that’s kind of the point: everything’s different this time. Not just the cold war world, but the world economy.

Which gets us to our theme for the day, and for this special broadcast: How I Learned to Stop Worrying and Love the Global Economy.

The new Cold War?
Tags in this Story
Share this Story