Figuring out which of the millions of money transfers happening each year are suspicious is an inexact science. Following reports in the New York Times and Wall Street Journal that the Central Intelligence Agency has had access to data on money transfers through outfits like Western Union, we looked at how certain transactions might be flagged.

It always helps to have a target – someone you know is a criminal or a terrorist, according to compliance expert Michael Dawson, who was a deputy assistant secretary in the Treasury Department and is now with Promontory Financial Group, a financial services consulting firm.

But if you’re casting a wide net?

“Then the problem becomes a lot more difficult,” he says.

Last fiscal year, Western Union, for example, reported 230 million transactions worth almost $80 billion. It is not enough to know that money is going to, say, Afghanistan or Pakistan, or other countries where Al Qaeda may be active, according to Timothy Edgar, a visiting fellow at the Watson Institute for International Studies at Brown University. He was the White House National Security Staff’s first director of privacy and civil liberties.

“You need to know additional information to say this transaction has some link to terrorism and it is worth looking into more closely,” Edgar says.

That information could be patterns of behavior tied together with other intelligence. But all that is balanced against privacy laws. Plus, a shrewd criminal or terrorist could use more than one company to transfer money. And there are other tricks.

“Maybe you are not actually sending it directly to the bad guys,” says Donald Daniel, who used to work for the National Intelligence Council. “You are sending it to somebody else who lives in a third country” — to someone who can get that payment to its financial destination without raising that red flag. 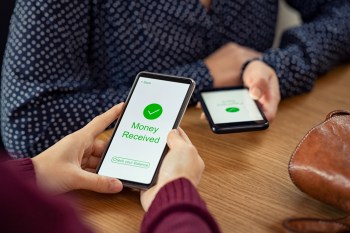