The problem with taking default out for a spin

The problem with taking default out for a spin

The partial government shutdown continues, and the looming question in Washington is this: What will happen on Oct. 17, if Congress doesn’t raise the debt limit?

The Treasury Department  we won’t be able to pay our bills. We’ll default.

But there’s a chorus of politicians in Washington who don’t believe that, and President Obama mentioned them yesterday, during his press conference in which he suggested they were saying, “let’s take default out for a spin and see how it rides.”

Rep. Steve King, a Republican congressman from Iowa, is one of those skeptics.

“I think that all this talk about a default has been a lot of demagoguery, a lot of false demagoguery,” King told CNN. “We have plenty of money coming in to service the debt. When we stop servicing the debt, that would be default.  We’re a long, long ways from that.”

That puts King at odds with politicians on both sides of the aisle, not to mention the White House and scores of academic and private economists, like Michael Feroli, J.P. Morgan’s chief U.S. economist, who say the financial markets would take a hit and interest rates would go up.

“You don’t know what’s going to happen if you drive off a cliff, but you can presume it’s not going to be good,” Feroli says. “We think it could throw the nation into financial crisis and lead to a recession.”

And even if the U.S. is still paying the interest on its debt, economists say borrowing costs would go through the roof, banks would stop lending, and Social Security checks would be delayed. According to Stuart Hoffman, the PNC Financial Services Group’s chief economist, it would be a very rough ride.

“All the wheels are going to fall off, the engine is probably going to conk out, and who knows, maybe the car is going to catch fire,” he says.

Hoffman points out the U.S. hasn’t been down this road before, but other countries have defaulted on their debt: Brazil, Argentina, and Venezuela, to name a few. Those defaults hurt their standard of living, and they made it harder for those countries to borrow money.

But Jim Kessler, senior vice president with the think tank Third Way, says those defaults only give us a partial sense of what could happen.

“Our Treasury bill and our dollar is the measuring stick for every financial transaction in the world,” he notes.

Overnight, that could change, and according to Kessler, “you could see some very bad worldwide reactions, possibly a worldwide recession.”

Kessler says taking default for a spin would be like driving a lemon. 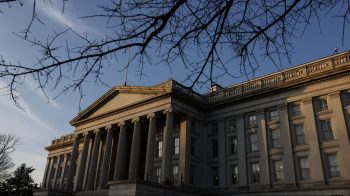