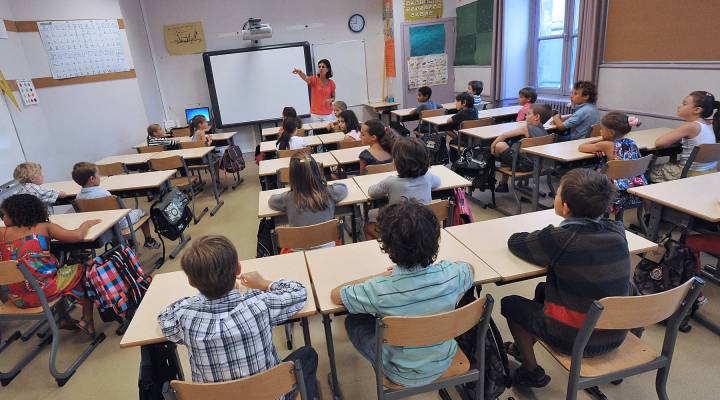 COPY
Annual testing may be here to stay, but states are expected to have more leeway. PIERRE ANDRIEU/Getty Images

Annual testing may be here to stay, but states are expected to have more leeway. PIERRE ANDRIEU/Getty Images
Listen Now

In public schools around the country, it’s not uncommon for the same textbook to stay in classrooms for six or seven years. But the latest generation of teachers is finding ways to get their own teaching tools, online.

Public school teachers can’t hit up Facebook and Twitter throughout the workday for help on the job.  They’re often blocked from accessing social media.

“What happens too often is that a teacher is basically on a lonely island in their classroom,” says Michelle Best, a vice president at the education site Edmodo.

Sites like Edmodo are password protected for use inside schools. They provide everything from learning games to classroom management tools for frustrated teachers who can’t tap the wilds of the internet.

“They don’t have a safe means of collaborating and sharing content, ideas, building lessons together,” says Best.

That’s what Edmodo’s built for. In fact, it looks and feels a lot like Facebook.  And it’s racked up 22 million users.

Adam Seldow is Chief of Technology for Chesterfield Public Schools in Virginia. He says so many teachers were already using Edmodo, it made sense to try it out district-wide. Especially because Chesterfield schools could scale up these digital learning tools for free.

“And we can now put the money toward excellent digital content,” says Seldow, “which is really where the bread and butter is for teachers.”

There’s no charge for a lot of the Edmodo apps. But districts can pay for premium content — and that’s where Edmodo makes its money.

That revenue potential has attracted investors like Jon Sakoda. He’s a partner at the venture capital firm New Enterprise Associates. He says the market for online instructional materials is worth at least $20 billion. But it’s only in the last five years or so that startups have been able to compete with established publishing companies like McGraw-Hill and Houghton Mifflin.

According to Sakoda, “Cloud computing and the internet enables students and teachers to try a product without ever talking to anyone, or having a salesperson show up.”

All this disruption does hold risk for school districts, though. Administrators and teachers might commit to an online tool, only to see it disappear the next school year.

But if startups can continue to scale up for tens of thousands of students, they might just give Big Education a run for its money.

This story was produced by TurnstyleNews.com, a project of Youth Radio.