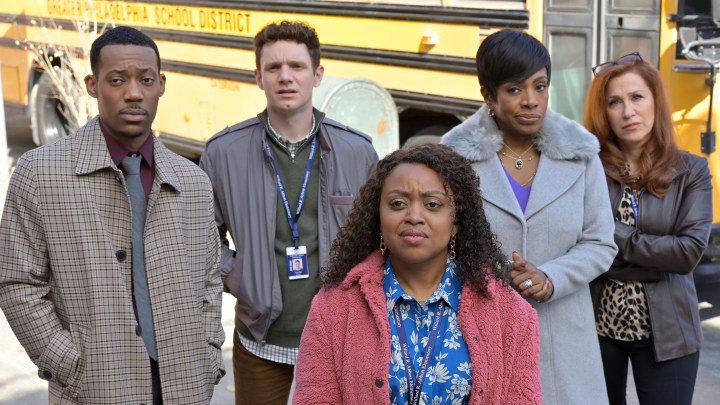 ABC’s “Abbott Elementary” is — in short — a hit. With its season 1 finale slated to air on Tuesday, it’s the first ABC comedy to quadruple ratings in its first season and currently holds a 100% on Rotten Tomatoes.

Brunson drew inspiration for the show from a real-life Philly educator named Ms. Abbott. And as much as the show is receiving rave reviews from critics, it’s also nailing a lot about the struggles, hard work and financial precarity of being an educator in the U.S.

“While it’s intended to be a mockumentary, some of the working conditions in which teachers in especially urban centers find themselves are very much what you see in that show,” said Katharine Strunk, a professor of education policy and economics at Michigan State University.

In one episode, for example, Quinta Brunson’s character tries to fix a flickering light bulb in a hallway and accidentally knocks out power in part of the school. Hilarity, of course, ensues. But in reality, it’s not uncommon for many schools to have serious building issues that go unfixed for years.

“The buildings tend to not have working AC or the lights flicker on and off and aren’t fixed. There’s a long waitlist to get the kind of technical assistance that the teachers and janitorial staff might need to be able to fix the problems in the building,” Strunk said.

According to a Government Accountability Office report published in June 2020, more than half of all public schools in the U.S. needed major repairs.

Some of the nation’s largest school districts lack air conditioning, despite being in locales that experience sweltering heat, making it harder for students to learn.

The difficulties of retention

Two educators in Brunson’s “Abbott Elementary” are in their second year of teaching. They’re the hold-outs in a series of new hires, still starry-eyed, ambitious and not yet worn down by the chaos of teaching in an underfunded school.

“We younger teachers are still getting the hang of it … if we don’t end up leaving,” Brunson says in the first few minutes of the pilot episode (right after one teacher puts out a trash can fire and before a student is spotted peeing on a classroom rug).

That’s something the show gets right, Strunk said: high turnover rates, especially among young educators. Though estimates vary, research shows that 44% of public and private school teachers leave the field within the first five years.

And the pandemic has only exacerbated the stressors that teachers endure. A survey by the National Education Association earlier this year found that a whopping 55% of educators were thinking of leaving the profession earlier than anticipated. Those figures were higher among Black and Latinx educators, who are already underrepresented among teachers.

A lack of basic supplies

The show also tackles the perennial issue of school funding. In one episode, a teacher buys her classroom new copies of “Peter Rabbit” using her own money. Those kinds of purchases are not uncommon for educators. A survey by AdoptAClassroom.org found that teachers spent an average of $750 of their own money on supplies for their students, for basics like crayons, scissors, paper, classroom decorations and tissues.

Jennifer Fletcher, a third-grade teacher in Chicago, bought supplies for her students in the first five years of her career, but she found it to be unsustainable.

“It’s exhausting,” she said. “We are constantly begging for things for our kids. The tipping point was just having to buy so much for so many.”

Many of the students at schools where Fletcher has taught are from low-income backgrounds. She said there was sometimes an expectation that she would help purchase supplies for her students because she could afford to.

“I remember at one point, a parent literally said to me, ‘You make the big bucks, you can buy it.’ I have to remember the community in which I taught, I did make a lot of money compared to them. It was a reality check. But I still can’t afford to, like, financially support your family and their education.”

One episode in “Abbott Elementary ” centers on a supplies wish list that teachers submit to their district, which oftentimes goes unfulfilled in the show. So, Brunson’s character turns to TikTok to fund her wishlist.

Fulfilling that supply list is a very real struggle for many educators. That’s why Brunson used the show’s marketing money to donate supplies to educators.

Though Fletcher said she’s not one for TikTok, she is among thousands of educators turning to crowdfunding platforms to give students greater educational opportunities. Fletcher said she’s had to turn to platforms like DonorsChoose, a crowdfunding site specific to educators, which allowed her to raise money for class projects. DonorsChoose has raised more than $1 billion since its founding in 2000 and supported more than 700,000 teachers.

Ashley Quetant is on the platform and recently raised money to build a classroom library. She has taught in New Orleans, Cincinnati and is now a middle school teacher in Philadelphia.

“I don’t always want to teach just from like little excerpts or a textbook all day,” she said. “I’ve had so many students that I’ve taught that had never sometimes even read a whole novel or a novel that they really enjoyed. And so it’s so important to me to choose interesting, highly engaging, culturally relevant novels, and I think every student deserves a copy.”

American public schools are chronically underfunded. Contributions from the federal government make up only 7% of funding for public K-12 schools.

When the majority of public school funding is left up to local and state governments, areas with richer tax bases can afford to fund schools to greater extents — which, in turn, promotes inequities, often along racial lines. EdBuild estimates that nonwhite school districts receive $23 billion less than white districts that serve the same number of students.

That leaves educators in more diverse, underfunded school districts  — as is the case in “Abbott Elementary” — doing the most they can for students with the little that they’ve got. And that, especially, teachers can relate to.

“We really go hard for our kids and work together to do anything to make our kids successful, even when there’s like systems in place that don’t always support us in doing that,” said Quetant, who works at a school where 100% of students receive free breakfast and lunch.

“It’s kind of everything else around that sometimes is frustrating, but seeing my students fall in love with reading and become better writers, that’s what brings me joy and puts a smile on my face.”