Lynn Good just took on the reins at Duke Energy, the largest electric power company in the country, this past July. The new CEO says its an interesting time for the energy industry. Consumers are worried about the increasing rates on their power bills and environmental issues like fracking. But Good has a different perspective on the controversial drilling technique used to expand shale gas production.

“Fracking has been a real technological change that has caused great innovation in our business and we’ve had the benefit of very low gas prices for our customers as a result of that,” she says.

Because of the challenges the industry faces, Good says power companies have to be positioned to adapt to the diversity of energy sources and welcome new trends like wind and solar power. And in the company’s latest earnings report released last week, energy use for customers was up about just 1 percent.

“Energy demand has been a challenge, really dating back probably to 2007 and 2008 when the economy took the downturn. We have been recovering, but not at a pace that you might expect,” she says.

Good says that her company drives a lot of the economic development of the communities that they are based in, so finding reliable, low-cost service will always be a priority despite the changing nature of the business. 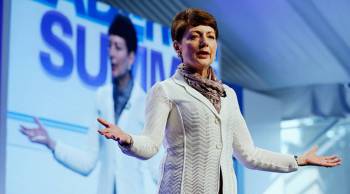 Duke Energy CEO on the future of energy