AmEx’s plan to lure gamers: Partner with ‘League of Legends’

AmEx’s plan to lure gamers: Partner with ‘League of Legends’

Marketers can have a tough time reaching young men. They tend not to stay in the same place very long. The exceptions — sports and video games. American Express is looking to capitalize on that by luring millennials into signing up for debit cards by praying on their video habits. This is new territory for the purveyors of plastic, but Stefan Happ with American Express says it’s a good time to invest in debit cards.

“The prepaid card business is like a $425 billion global industry, growing north of 20 percent every single year since 2009,” he says.

The company thinks it can get a bigger piece of that market by tapping into 18-24 year olds, people less likely to have a bank account. AmEx has made a deal with the video game “League of Legends.” Starting Wednesday, sign up and you get 1000 free points you can spend on virtual free goods.

So what exactly will gamers be buying with the Riot Points they earn with this card? Many will use them on “boosts,” which can raise their champion’s skill level. Others will buy new champions to play with as well as “skins” that change their appearance in the game. Here’s a list of some of the most popular champions and skins and how many points  players will pay for them along with their approximate dollar value:

Master Yi
450 Riot Points or about $3
The most-played champion in “League of Legends,” this close-range attacker boasts a skillset designed to let players move in close enough to use his deadly Wuju blade. Many players think Master Yi is overpowered, especially among beginning players, which may explain his popularity.

Spirit Guard Udyr
3250 Riot Points or about $23
This skin gives the martial arts master Udyr an appearance similar to a Shaolin monk, complete with prayer beads and traditional Japanese-style footwear. The Spirit Guard skin is one of the most popular and expensive single items in “League of Legends.”

Lux
790 Riot Points or about $5
Another popular champion, Lux is a master of light-based magic who attacks from afar.  Most players enjoy using her “Final Spark” ability, which resembles an enormous laser beam.

Bear Calvary Sejuani
1359 Riot Points or about $10
Who wouldn’t love riding into battle on a freakin’ bear? The champion Sejuani rides a number of animal mounts and in true Internet-culture fashion, the bear is the most popular option.

Teemo
585 Riot Points or about $4
This fuzzy little creature from a race known as “yordles” is one of the most iconic champions in the game and will grace the front of one of AmEx’s prepaid cards with his image. Players use his bow to harass enemies from long ranges and to set traps to slow them down.

“They have 32 million players worldwide. Those players play a staggering 1 billion hours of game play a month,” says Happ.

Ashish Jain is with Booz & Company. He says by partnering with an online video game company, American Express is playing with millennials on their turf.

“When you look at the research, what these guys are looking for is engaging experience,” he says.

Jain says if this approach works, other credit card companies are likely to follow.

*CORRECTION: The original version of this article misidentified Ashish Jain’s workplace. He’s with Booz & Company. The text has been corrected. 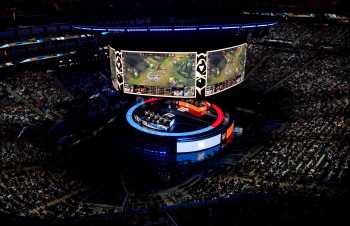 Esports have exploded, but the profits haven’t followed