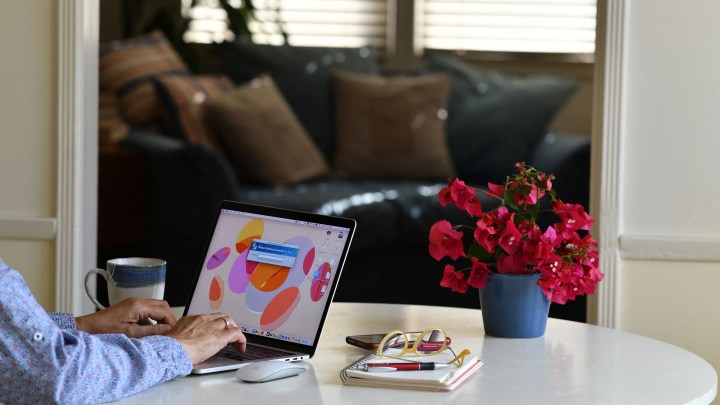 COPY
With so many people working from home, more employers are monitoring what workers do on company computers and tracking the websites they visit. Chris Delmas/AFP via Getty Images

With so many people working from home, more employers are monitoring what workers do on company computers and tracking the websites they visit. Chris Delmas/AFP via Getty Images
Listen Now

As an IT guy, Micah Excell (yes, that’s his real name) spends a lot of time looking at his colleagues’ computers. And he sees a lot of nonwork stuff.

One time, two workers were having an issue editing a PDF. So they shared their screens with him. He could see they were playing the video game League of Legends … with each other.

“You could tell they were trying to hide it,” Excell said. “They had minimized it. But you could still see the League of Legends logo kind of in their taskbar.”

There are plenty of people like Excell’s colleagues. Workers who’ve been stuck at home for 18 months may tend to forget that the work laptop that’s stuck at home with them isn’t theirs. Instead of replacing broken personal devices, with laptops in short supply many workers have been using their work devices for everything. But mixing work and play on the same machine comes with risks.

For example, if your company’s hacked, the attackers could access any personal documents stored on your work computer.

“They didn’t necessarily want to steal your tax forms,” said Lesley Carhart, an incident responder with the cybersecurity firm Dragos. “But all of a sudden, they’ve got them. It’s a crime of opportunity. If they realize what they’ve got, they certainly might sell it.”

Even if there’s no hack, your employer might be able to claim ownership of anything you create on your work computer.

“So you’ve got a side hustle, or just a really cool research paper or concept,” said Camille Stewart, a lawyer and cyber fellow at the Harvard Belfer Center, who also works for Google. “You started drafting that on your work computer. In many jurisdictions, your organization could claim ownership of that.”

Since the start of the pandemic, more companies have also started using monitoring software to track what websites we visit, according to Josh Bersin, an industry analyst who studies human resources. He said that’s partly because there’s more to measure.

“When you’re in an office, you do have walking time, eating time, going out for coffee. There’s times when you’re away from your computer,” Bersin said. “But if you’re working from home, there’s just more volume of time and more data.”

Companies shouldn’t use this kind of software without telling employees, Bersin said, and most don’t actually spend a lot of time looking at whether you’re doing work or, you know, playing League of Legends.

But all the same, maybe you should just do it on your cellphone instead.