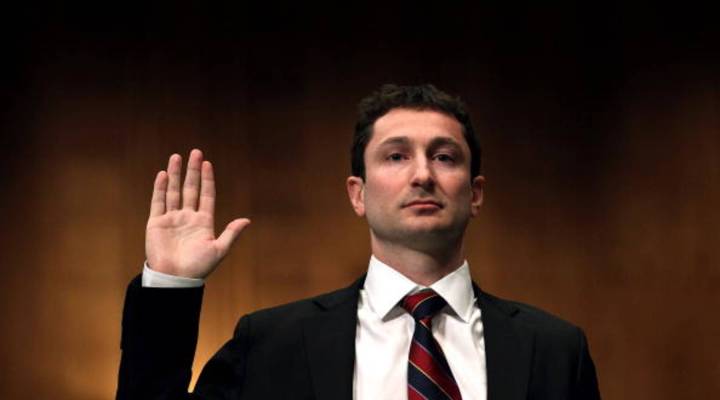 Fabrice Tourre (L), executive director of the structured products group trading for The Goldman Sachs Group, is sworn in while testifying before the Senate Homeland Security and Governmental Affairs Investigations Subcommittee on Capitol Hill on April 27, 2010 in Washington, D.C. Mark Wilson/Getty Images

The Securities and Exchange Commission sued Goldman and Tourre in 2010, alleging they misled investors while selling subprime mortgage investments — which later failed spectacularly. Goldman settled for $550 million, in what was then the biggest SEC penalty, without having to admit to fraud. Tourre, who has left Goldman and maintains he is innocent, decided to fight to clear his name.

U.S. District Judge Katherine Forrest, hearing the Fabrice Tourre securities-fraud trial, told lawyers to “have a heart” and not use jargon during the proceedings. She singled out the dreaded CDO, but also referred to other terms the jurors may not be familiar with: Security, securitization, collateral, asset-backed, short and long investors, portfolio, pool of assets, swap and offering memorandum.

But here at Marketplace, we know bankers. And we know they won’t be able to resist dropping in a CDS here and a securitization there.

So for all of you following the trial (as closely as CNN viewers were watching the George Zimmerman trial), here are a few explainers to help you along:

Collateral. You’re going to hear this one a lot. Collateral’s what you lose if you fail to pay back a loan. It’s like when your buddy borrows a hundred dollars until Friday, and agrees to hand over his Playstation as collateral. When he pays the money back, he gets his game back. No pay: no play.

Here’s one Italian bank’s cheesy approach to collateral. One reason why home interest loan rates are lower than college student loans is that banks can re-possess a house as collateral, but not a college education.

Security. This one cuts to the heart of a lot of the exotic instruments Fab and his friends were toying with before the roof of the economy caved in. A security is something that’s been standardized so that it can be traded on an exchange. For example, a banana can’t be traded, because one banana is not the same as another: They may not weigh the same, for example. And no one wants to trade bananas one-by-one. But in the markets, one metric ton of bananas is the same as another metric ton of bananas. Easy to wrap your head around. Easy to trade.

Examples of securities: Shares (also known as stocks), because every company’s share can be measured in the same way. Bonds: Also the same.

Securitization.A device that creates securities. These devices are also called instruments and vehicles. Watch out for multiple abuses of those phrases in court, too. The securitization process takes things that are different, like car loans, or student loans, or mortgages or even credit card debt, and turns them into identical cookie-cutter bonds that can then be traded.

Imagine a sausage machine: All sorts of malarkey goes in one end, but out the other comes a bunch of identical sausages. Those sausages, or bonds, can now be traded on the open market. Don’t bother trying to wrap your head around what happens inside the machine: Most of Goldman Sachs has no idea what goes on in there, either.

CDO. The infamous collateralized debt obligation. Another kind of sausage machine. It works the same way, with debt going in one end of the device, and bonds coming out the other. The only difference is that the CDO uses bonds that have already been through another securitization: Using sausages to make sausages, in other words! Here’s a more in-depth explanation of CDOs and their role in the financial crisis.

Short and long investors. Short and long refers to an investor’s belief in – and commitment to – the future movement of something. If you are long the Packers, it means that not only do you believe that they’re gonna win, you’ve put money on it. Maybe quite a bit of money. If you’re short, you believe the Packers are gonna get crushed; you’re so convinced, in fact, that you’re prepared to borrow a thousand bucks from the Russian Mob to make that bet.

Though subprime mortgages sunk many investments, many people were able to profit by shorting them.

Portfolio. A now-dead magazine for rich people. Also a fancy briefcase. For the rest of us, a portfolio is just a list of investments. Quick, what do you have in your retirement account? That, my friend, is your retirement portfolio. Say it out loud. Sounds good, right? That’s why bankers like to use that word so much.

What should your portfolio look like? It depends on who you’re asking. One thing it should be is well-diversified, that way it never loses too much value. Here are some other steps you can take.

Swap. Lend me your car tonight and I’ll let you use my Xbox for the rest of the week. That’s a swap. It’s all about risk and reward. Your reward for lending me the car is use of the Xbox.

The risk is that I’ll drive it into the lake – but you’re betting that I won’t. Bankers’ swaps work on a much larger scale, of course.

It’s got all the details in it that the company selling the stock or bonds are required to disclose about its health and operations. During Facebook’s IPO, for example, their offering memorandum had to disclose everything from their history, to executive salaries, to potential legal problems. In the case of a CDO or other securitization, it’s a description of the pool of assets; or the raw material for the sausage, if you prefer.

Raghu Manavalan contributed to this report.