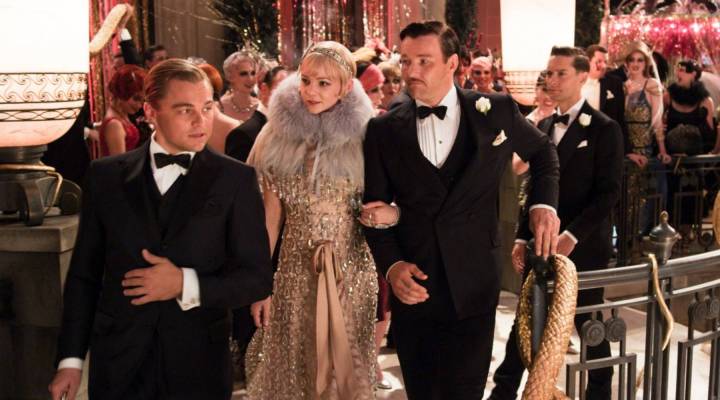 In theaters and with ‘The Great Gatsby,’ it’s high class or class war

COPY
Scene from the film "The Great Gatsby." Warner Bros.

In theaters and with ‘The Great Gatsby,’ it’s high class or class war

Baz Luhrmann’s take on “The Great Gatsby” hits theaters on Friday, and because Luhrmann has always been a “more is more” type of director, a story about the 1 percent partying through the Jazz Age seems like his kind of flick. But for all of the novel’s warnings about the myopic pursuit of wealth, it’s not quite clear whether Luhrmann’s film gets — or is making — that point.

“It’s like if you took every image in a luxury fashion magazine and scrambled them all together and blew them up to big screen size and put them in 3-D and filled them with movie stars and a big soundtrack,” said New York Times chief film critic A.O. Scott.

When it comes to the poor characters, however, Scott says the film is less generous.

“They are meant to be pitied, but at the same time they are so abject and so grotesque that we feel, as members of the audience, that we belong in the world of East and West Egg,” Scott said. “No one can watch this movie, whatever their own circumstances, and identify comfortably with the poor characters.”

Even if the fetishization of the rich goes against the grain of Fitzgerald’s novel, Scott says, the movie is making another point about life in the present day.

Even as Gatsby is poised to take theaters by storm, some of this year’s most highly anticipated films, like “The Hunger Games” sequel, in which grinding poverty leads to a rebellion, or Neill Blomkamp’s “Elysium,” in which a wealthy few live on a luxurious space station while everyone else hacks it out on a ruined earth, make heroes of poor characters.

It might seem as if our post-recession anxieties about money — the desire for it, and the conflict over it — are being reflected back at us on the big screen but film historians say these plots date back to the birth of the movie industry in another century’s Gilded Age.

“The early film pioneers, who thought of themselves as businessmen and entrepreneurs rather than artists, they looked toward the sister arts for content in the beginning and what they found in the theater, what they found in literature, was a very clear line of demarcation between right and wrong, good and evil, morality and immorality,” said Michael Bolus, a course director at the Los Angeles Film School.

“And because we’re talking about a guilded age context, the late 19th and early 20th century, the model often issued from a perception of the hyper-wealthy, oligarchs, plutocrats, supressing and oppressing the lower classes.”

So from “It’s a Wonderful Life” and “Bonnie and Clyde” to “Wall Street” and “Titanic” conflicts over wealth and the consequences of having it, have made for hundreds of riveting movie plots and will make for hundreds more.

Which is to say that maybe Gatsby’s narrator, Nick Carraway, had it exactly right, when he said, “so we beat on, boats against the current, borne back ceaselessly into the past.”