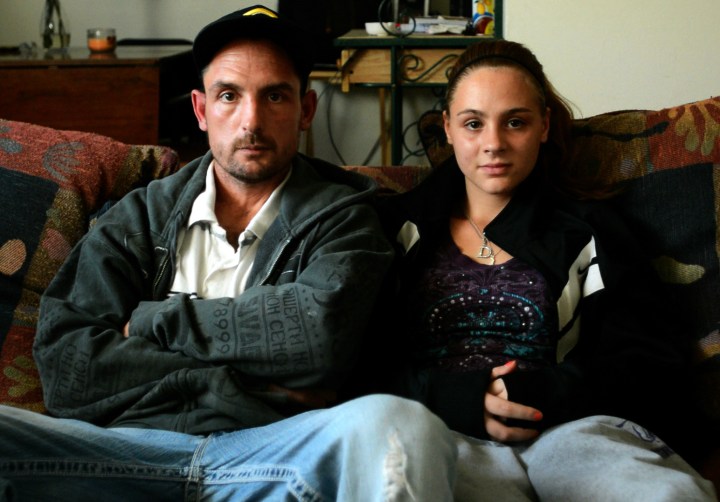 One student’s path from Oyler to college

COPY
Mike Gribbins with daughter Raven, who's aiming to be the family's first high school graduate. Stacy Doose
One School, One Year

One student’s path from Oyler to college

It’s recruit day at Penn State Greater Allegheny. Promising high school athletes have been invited to check out the small campus just outside Pittsburgh. A few dozen students and parents file into a classroom for a Q&A with professors.

“We’re not part of the glossy brochure thing,” a professor reassures them. “So we’ll give you the true answer.”

From the sea of expectant faces, a hand pops up from a pretty, brown-haired girl in a hot pink blazer and artfully torn jeans.

“How good is your math program here?” she asks.

The question is from Raven Gribbins, an 18-year-old senior from Oyler High School in Cincinnati, Ohio. She wants to be a math teacher. It would be hard to overstate how far Raven has come to get here. I don’t just mean the six-hour drive from Cincinnati with her dad and basketball coach — or that the school principal had to dip into some funds from donors to pay for the gas and hotel.

Just a few years ago, Raven going to Penn State would have seemed…unlikely. That’s when a video of her in a street fight with another girl popped up on YouTube. Raven’s temper flared up at school, too. She’s worked hard to rein it in.

And she wants to go somewhere. Raven grew up in Lower Price Hill, or 8th and State as the locals call it. A lot of the families have roots in the coal-mining towns of Kentucky and West Virginia. Over the years, poverty and drugs have eroded what had been a close-knit working class neighborhood. Both of Raven’s parents have struggled with addiction, and been in and out of jail – especially her mom. Every time her mom went to jail, Raven would act up in school and wind up suspended.

“Now I realize that I can’t live her life for her,” Raven says. “She’s going to make her own choices, so I can’t worry about her no more.”

“She’s the epitome of what our young ladies go through down here,” says Joe Saylor, Raven’s basketball coach at Oyler. He grew up in the neighborhood. “One day she might have her drug-addicted aunt’s kids — taking care of them,” he says. “The next day she’ll be here playing basketball just like a normal high school student in Anytown, USA.”

Just the fact that there is a high school is a big part of Raven’s story. When her dad and Joe Saylor were at Oyler, it only went to sixth grade. Most kids didn’t want to leave the neighborhood for high school, so they dropped out. Then seven years ago, Oyler added a high school and eventually team sports and prom — the things that keep kids interested in school. Seniors are paired up with mentors to help them graduate. Next month, Raven will be the first in her family to finish high school.

“Someone has to be the one to break that cycle of not being educated and living in poverty,” Saylor says. “Our students here at Oyler are doing that. We have first generation college students coming out our high school every year.”

For Raven, a change of scenery helped. This year she moved out of the neighborhood, where she’d been living with her grandmother since she was 9.

“People were getting shot down here and every time you go outside there’s a drug deal going on,” she says.

She’s back with her dad, Mike Gribbins, in a quieter part of town. He’s been sober now for more than five years. He goes to Raven’s games and gets on her about her homework. Under his watch, she’s brought her grades up from mostly Cs to mostly As.

“This is probably the only year that I’m going to have, you know, to spend it with my daughter,” Gribbins says. “So I kind of feel lucky, you know, that I got this opportunity.”

“Hearing him say this stuff, it means a lot because now I know he actually does care,” Raven says. “And a daughter needs a father in her life.” So last weekend, father and daughter and coach piled into a car and drove 300 miles to McKeesport, Penn.

Raven plays volleyball, too. The coach at Penn State Greater Allegheny spotted her on a recruiting website and emailed her out of the blue. Raven got to stay in a dorm and tour the campus — and show off her volleyball skills in the gym. As they get ready to head back to Cincinnati, Coach Saylor asks Raven how she liked it.

“To me, this place fits you,” he says. “I think it would be good for me,” Raven says. “It’s a small campus, there’s really nice people, the coach is nice. I fit in with them.”

It’s by no means a done deal. Raven hasn’t actually been accepted yet. She just took the ACT for the third time, hoping to raise her score.

Then there’s the question of how to pay for it — whether she’ll get enough financial aid. And even then, Saylor says, can she make the break?

“What scares me is that, if she gets an opportunity to go away to college, will she take it?” he says. “Because you always feel like you’re being pulled back into your family’s drama.”

For now, Raven’s just worn out from her adventure. She grabs her pillow out of the trunk and settles in for the long the ride home.