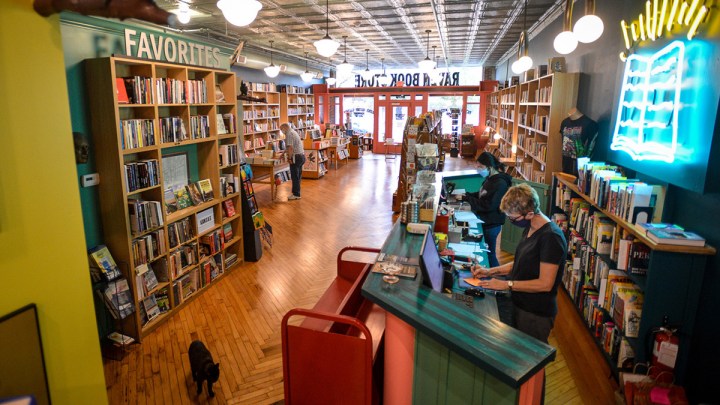 Book sales have been consistently strong during the pandemic, but it’s mostly benefited larger companies like Amazon. Bookstore sales actually fell 28% last year. Those sales are finally recovering in 2021, but the struggle has slightly rewritten the indie bookseller manual.

That’s because when brick-and-mortar bookstores closed to in-person browsing at the beginning of 2020, independent vendors across the country started selling books online. Some used e-commerce platforms like bookshop.org, while others did it completely on their own, without much infrastructure at all.

Even though indie bookstores are back in business now, Milliot said, the new hybrid sales model is here to stay. “They all saw that, you know, it can be done and it has to be done. I mean, nobody’s gonna go backward,” he said.

That’s been true for Raven Book Store in Lawrence, Kansas. “It saved us,” said owner Danny Caine. “That shipping is why we’re still here.”

Caine said only 1% of Raven’s sales took place online before the pandemic. Now, it’s more like 30%, and the store ships all over the country. Caine even expanded to a bigger location in August to double down on his improvised shipping operation.

“It’s just going better than we could have possibly dreamed,” Caine said.

And Caine knows how rare that is in the age of Amazon. Earlier this year, he authored a book called “How to Resist Amazon and Why.” (Amazon had no comment about the book.)

“Of course you can’t compete with Amazon in terms of selection or speed,” he said. “But one thing you can have that they don’t is a point of view that people really celebrate.”

Part of that point of view is giving people who have moved away a connection to where they once lived. That’s why Marilyn Kearney, who used to live in Lawrence, still supports Raven.

“I’m currently living in Oregon, and I’ve been a Raven customer for, like, 12-plus years,” Kearney said. “They do a lot with local authors, which I really, really like.”

Despite his recent success, though, Raven owner Caine said the bookstore business is still unpredictable. “’Cause it’s like, we’ve had to work really hard to get here,” he said. “It could go wrong any second.” 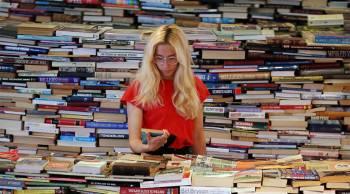 Independent bookstores are thriving, but a threat looms