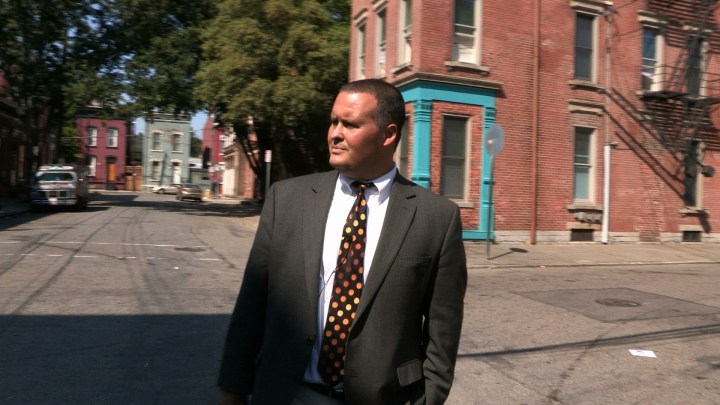 Oyler principal on the budget bubble?

Oyler principal on the budget bubble?

Craig Hockenberry is in his office, interviewing a potential science teacher for next year, when a letter arrives.

“’Dear Mr. Hockenberry, thanks for your service,’” he reads. “’This is to inform you that your administrative contract expires, and your services will no longer be needed, effective July 31, 2013.’”

He knew it was coming. Cincinnati Public Schools is facing at least a $46 million hole in its budget next year. The district is laying off every administrator whose contract expires this summer — more than 70 people.

Getting a pink slip when you’re trying to hire someone could be a little awkward, but he goes right back into the sales pitch. “We’re moving forward as if we’re all coming back,” he tells the job candidate.“Whatever happens, one dead monkey don’t stop the circus down here at Oyler, and it’s a good school.”

This happened once before in Hockenberry’s career — he was brought back the next day — and it is likely most of the principals will keep their jobs this time, possibly with less pay.

The district may not know exactly how much state funding it will get until July, she says. Officials don’t want to get locked into a new contract with principals until that’s sorted out.

“We’ve been in a budget crisis, really, for several years,” Walsh says. “So we need to preserve all of the options to close that really huge gap.”

To a lot of people Hockenberry is Oyler. He’s been there almost 15 years. He’s led its transformation — from a failing elementary school in a rundown building to what’s known as a community learning center. There’s now a preschool and a high school, along with neighborhood services like health care and counseling — even an eye clinic. Slowly Hockenberry and his staff have pulled Oyler up from the bottom of the state’s ranking system.

“We’re here because we want to work with Craig and we believe in his mission and the way he wants to run the school,” says teacher Beth Dorfman. Now teachers are wondering if they should stick around next year, she says.

“You just question what the place would be like if he wasn’t here,” she says.

Someday, Hockenberry will leave. It’s a lot of job for one guy — school during the day, meetings and fundraisers at night. He’s about to put his house on the market. Too many people from the neighborhood found out where he lives and started showing up at his front door.

He also has ambitions to become superintendent one day. “I would love to be in that role,” he says. “Obviously the non-renewal is going to make my search even more diligent right now.”

For now, though, he’s got work to do. As school lets out, Hockenberry slips on a white windbreaker with the word “principal” spelled out in big black letters. There’s been a lot of fighting on Hatmaker Street, right in front of the school. Bullets were flying over the weekend. So Hockenberry and his staff fan out to block the street and keep kids from walking into trouble.

“Anybody that doesn’t listen to our treaty line here — they go home,” he tells his colleagues. Before long a group of students starts heading down the block his way.

“Let them know, when they get to me, they’re going home for three days,” he says over the radio.

Whatever happens, Hockenberry says Oyler will carry on without him.

“It will run well if they find somebody that has the passion and the sense of urgency, too,” he says. “If that day comes — it may never come. I may spend the rest of my career at Oyler and I would not be unhappy.”

But just in case, he’s been sending his resume around.