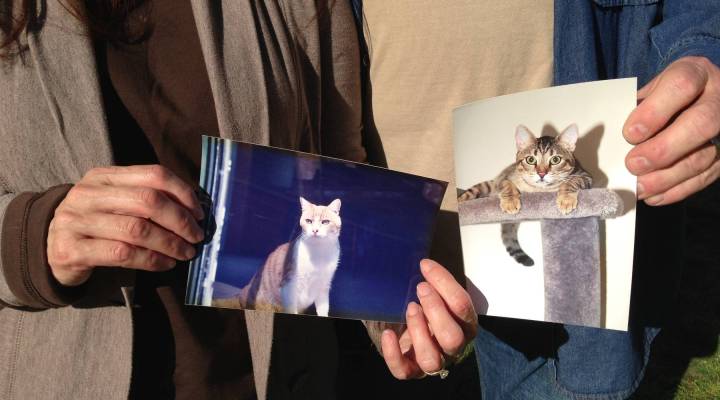 COPY
A picture of Pumpkin, a cat owned by John Noel, a deputy sheriff for Los Angeles County. And the donor cat that gave Pumpkin a kidney. Tess Vigeland

A picture of Pumpkin, a cat owned by John Noel, a deputy sheriff for Los Angeles County. And the donor cat that gave Pumpkin a kidney. Tess Vigeland
Listen Now

Owning a pet is a commitment not unlike marriage. You’re with each other for better or for worse, in sickness and in health. And just like with humans, the sickness part is incredibly tough to go through. It’s also incredibly expensive. People facing end-of-life care will, naturally, do anything and spend almost any amount of money to save and extend their lives. When it comes to pets, lots of families will do the same. And the decisions can be heart-wrenching.

I visited my vet just a couple of weeks ago with my 3-year-old black lab, Ronan. He’s allergic to something, probably our grass, and gets this nasty skin condition. So Dr. Woody Walker of the La Canada Pet Clinic took a look. By the time I left, we’d done a blood test, an office exam, gotten two prescriptions and a special shampoo — plus a prescription refill for my cat’s thyroid condition.

I told Ronan he needed to get a job. But this is what happens when you have a pet. It’s expensive. In fact here in the U.S. we spend — collectively — $53 billion a year on our pets for everything from medicines and operations to food and toys. In our house, we’re lucky than none of our four animals has a terminal illness. Because if and when that happens, I don’t know what we’ll do. We’ve tried to set a number for what we’re willing to spend to save or extend any of their lives, but that conversation never resolves itself. And Dr. Walker says those decisions have gotten much more difficult with advances in medical care for pets.

What that means for pet owners — is more tough decisions.

That’s where Tom and Jeanne Herrman from Burbank, Calif., come in. Last July, they rescued Bentley, one of two Golden Retrievers. Bentley, 11, has a fast-growing tumor in his left front leg, though you’d never know from his enthusiastic greeting.

“Bentley’s gonna be hard cause he’s just a quick love and I think he’s got 4-12 weeks,” said Jeanne.

Bentley was diagnosed in December and the Herrmans didn’t have many options.

“It was just the amputation and oncology. And for right now just keeping the pain away and the inflammation,” said Jeanne.

The veterinarian explained to the Herrmans about the costs if they went the other way — $6,000-8,000. The other way being amputation and chemotherapy, which they decided against. Not purely for cost reasons, but because Bentley’s life wouldn’t be the same and there was no guarantee he would survive long past the surgery.

“It’s very easy when a dog becomes a family member you look at all those decisions a little differently. We’ve been through it with both of our parents, we had to make the quality of life decision,” said Jeanne. “They’re not easy, but you’d rather make it than have them suffer a lot.”

For John Noel, the decision was fairly easy to spend more than $10,000 for a kidney transplant for his 13-year-old cat, Pumpkin. He proudly shows Pumpkin off in a photo.

“This is Mr. Pumpkin. And this was taken six or seven months post-transplant. And then we have a picture of Hopi, who’s the donor,” he said.

Noel is a deputy sheriff for Los Angeles County, a public servant who doesn’t boast a large paycheck.

“I work hard for my money and don’t have a lot of it. But you know there are priorities in life,” he said.

He found Pumpkin wandering the streets as a 5-week-old kitten. And like most pet owners, described him as part of the family. Money simply wasn’t a factor in his decision.

“When you have that kind of love in your heart for another creature, be it an animal or a human, I don’t think anybody who has that love or that feeling would ever think otherwise,” said Noel.

Dean Philip Nelson of the College of Veterinary Medicine in Pomona, Calif., says societal pressure plays a role in many pet owners’ decisions about end-of-life care. The agonizing questions around human end-of-life medical intervention have now made their way down to the pet kingdom and owners often feel guilty if they don’t do everything possible, no matter the cost, to save or extend their animals’ lives.

“I think it’s harder not just because of the technological answers, but I think our own ethos have evolved. And not necessarily in a good way,” said Nelson. “I believe that — and this is a personal belief — that many of us are loathe to have to face the end-of-life issues. And some of us have been mesmerized by the advances of medicine.”

Of course not everyone can afford to even contemplate expensive treatment. Alana Yanez of Highland Park, Calif., sees that situation firsthand in her work with the U.S. Humane Society’s Pets for Life program, which provides veterinary services in low-income neighborhoods. She’s counseled pet owners going through decisions about how to care for their animals. And last October she faced the situation herself when her 11-year-old Labrador Retriever, Max, started limping. Her vet said it was cancer.

The vet told her Max was in pain and that unless she had $40,000 laying around for the surgery and after-care, “He goes, ‘I would put him down.’ So we decided to do that. I still sometimes struggle with whether or not we made the right decision. Because you know putting $10,000 on a credit card, I could afford it. And I think would that have been worth it if it extended his life another 5-6 months?”

In the end, she says she’s confident they made the right decision and now she comforts herself with 2-year-old shelter dog, Dottie.

If I thought this story would help me figure out how to plan for the inevitable with our pets… Well, it didn’t. These are deeply personal decisions — sometimes dictated by cost, more often dictated by that thing that happens every time a cat curls up on your lap or a dog rests his chin on your knee. And there’s no right or wrong in that.