The tentacles of the sequester could cling to your tax refund. A chunk of the more than $300 billion the IRS refunds each year could be delayed if the sequester forces the agency to furlough workers.

The average refund is nearly $3,000, which is serious money to people like Claire Goodwin and her husband Trevor McQuain in Fort Collins, Colo. Just days before they filed their tax return, Trevor lost his job as a mental health counselor. That makes their refund especially important this year.

“To have that extra money, we will be able to not worry as much as we would in terms of being able to pay our mortgage as he looks for a new job,” Goodwin says.

The prospect of a delay is troubling for families who count on a refund to make ends meet. It’s also setback for those who want to spend it on home improvement or a major purchase. And, given the IRS hands money back to more than 100 million income-tax payers a year, widespread delays would be felt across the economy.

“That would be significant and could certainly be another damper on growth in the first half of the year, which many people seem to be worried about at the moment,” says Cary Leahey, chief U.S. economist at Decision Economics.

It’s not just refunds that are on the line. IRS employees who man help desks and enforcers who look for fraud would also work reduced hours. That means taxpayers seeking answers may struggle to get them. And some cheats may slip through the cracks.

The good news is unionized IRS employees must get 30 days notice before being furloughed. That hasn’t happened yet. The bad news is a furlough could hit in April, hindering the returns of those who file close to deadline.

“It’s like the busiest time of the year, actually,” says Colleen Kelley, president of the National Treasury Employees Union, which represents 78,000 IRS workers. “From the middle of April to the middle of May is really when so much of the work of the IRS processing for the filing season is done.”

A sequester crunch wouldn’t be the first delay this tax season. Because of the last minute fiscal cliff deal, the IRS had to scramble to reprogram and test its systems. That holdup is why it’s still not ready to accept certain tax forms and won’t be until sometime in early March.

All this appears to be slowing down refunds. Treasury Department numbers show that through February 22, refunds were $15.7 billion lower than this time last year. The prospect of further delay is infuriating taxpayers.

“I mean, that’s money we’ve paid in and money that is ours rightfully and I think we should be able to get that in a timely fashion,” says Dr. Melanie Ellis, a veterinarian in Walnut Creek, Calif.

She expects a refund when she and her husband Stephen Ellis file. She owns a veterinary practice and says her business hasn’t fully recovered from the recession. She’s planning to use their personal tax refund to shore it up.

“We’re gonna need the money to pay bills, help make payroll and keep us in cat food,” she explains.

Whether it’s a prolonged wait for Meow Mix, home repairs or emergency cash, a sequester-delayed refund would alter the plans of a lot of Americans. The advice to taxpayers wanting a swift refund is the same as always: first come, first served. That’s why Claire Goodwin and Trevor McQuain in Colorado filed very early. They now have their money in hand. Those who don’t do taxes soon may not be so lucky. 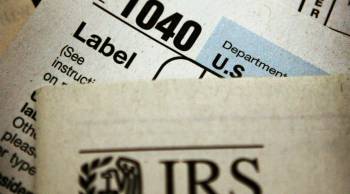