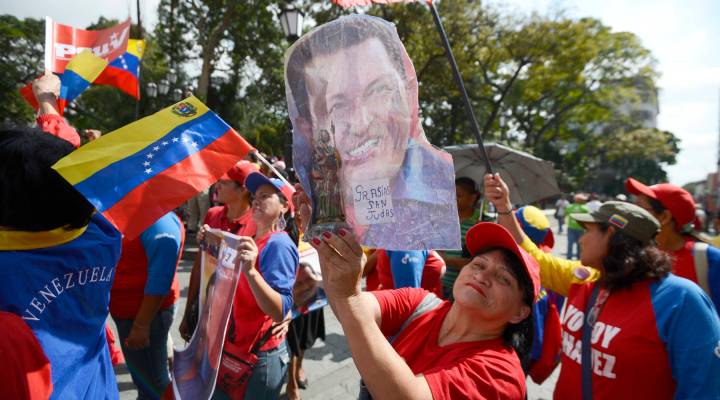 COPY
Supporters of Venezuelan President Hugo Chavez gather to celebrate after Chavez announced on Twitter that he had returned to the country from Cuba on February 18, 2013. JUAN BARRETO/AFP/Getty Images

Supporters of Venezuelan President Hugo Chavez gather to celebrate after Chavez announced on Twitter that he had returned to the country from Cuba on February 18, 2013. JUAN BARRETO/AFP/Getty Images
Listen Now

Venezuelan President Hugo Chavez made a surprise return to his country Monday after spending over two months in Cuba for cancer treatment.

The political climate and economy in oil-rich Venezuela has grown increasingly uncertain during his absence, as observers criticized the Venezuelan government for lacking transparency on his health. The calls eventually prompted the government to release photos of a smiling Chavez just days before his return.

“He had been a micro-manager of basically everything,” Federico Barriga, a Latin America economist for the Economist Intelligence Unit, says Venezuela is an economy recovering from a double-digit deficit, stagnant growth and increasing inflation, but that without Chavez there was a lack of certainty. “His ministers weren’t sure about how to take the economy forward.”

Barriga also said that if Chavez’s health deteriorates again, or new elections come up, the country may be required to adjust economic policy.