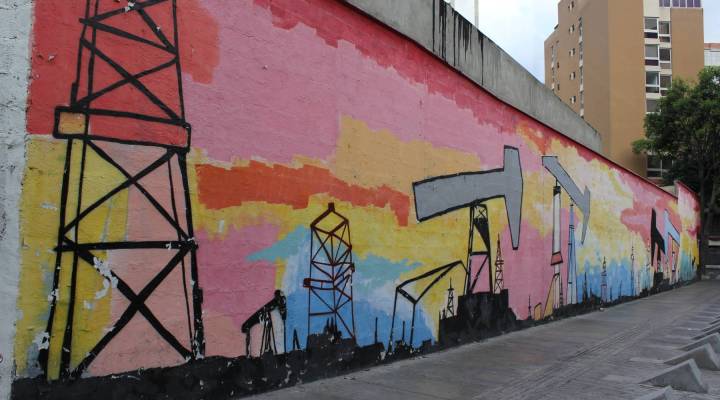 For countries that produce oil, each day brings possible signs that prices will rebound. No country needs that more than Venezuela. The petrostate is almost entirely dependent on drilling for oil and selling it – crude accounts for 96 percent of export revenue.

Yet by most accounts Caracas has mismanaged the resource, and today Venezuela stands as one of the world’s most miserable economies. The country sits on the largest proven reserves in the world, yet produces a fraction of what Saudi Arabia and Russia do every day.

“We are condemned,” said Carlos Mendoza Pottella, a petroleum economist at the Central University of Venezuela and advisor to the nation’s central bank. “They say we have oil for 500 years. So we’re doomed to keep suffering from this disease.”

Doomed? disease? Venezuela is Exhibit A in what some call the “resource curse,” or paradox of plenty. One place to start unwinding the paradox is downtown Caracas. On a pedestrian-only shopping street, the middle class still appears to be buying: clothes, shoes, books, phones. There’s a saying here that people have taught me: “It’s cheap, I’ll take two.”

“It is the lubricant that fuels the economy and it pervades every aspect of society,” Tinker Salas said, “creating an artificial sense of expectation and of entitlement.”

People walking in the streets of Caracas.

Venezuela’s oil age began in the early 20th century. The big gusher in 1922, the Barroso No. 2 well in Maracaibo, spewed as much crude as the famed Spindletop well in east Texas two decades before.

“And that really introduces Venezuela into the period of modern oil production,” Tinker Salas said. “By 1923 and 1924, the U.S. is involved. So you have two large conglomerates eventually coming out of this process – which is Shell and eventually Standard Oil Company of New Jersey.”

The American oil companies and workers brought Christmas trees, hot dogs and baseball to Venezuela. By 1929, Venezuela was the world’s top oil exporter.

But as often happens in petrostates, oil shoved aside other sectors. Farmers grew less coffee and cocoa beans, instead moving to cities built with oil money. The agricultural sector has struggled ever since, according to Pottella.

“Every government that comes to Venezuela brings a new plan to develop agriculture and the industrial sector,” he said. “But they fail.”

They did try. But manufacturing was hard, and drilling oil was easy. So many oil dollars flooded in, chasing Venezuelan bolivars in exchange, that the bolivar increased in value. The strong currency made exports more expensive abroad, and thus less competitive.

“We brought Ford to Venezuela, Toyota to Venezuela,” Pottella said. “But they only made a few parts, not the core of the car. Industrialization was cosmetic.”

Banners with Hugo Chavez’ face line the streets of Caracas.

As Venezuela went all in on oil, prices went bust in the 1950s. To prevent a recurrence, Caracas joined big oil producers from the Middle East and formed a group in 1960 to help manage global supply and not over produce. They called this organization OPEC.

OPEC helped keep prices high in the 70s. Which was bad for America, very good for Venezuela.

“We had the Concorde in Caracas connecting us to Paris,” Tinker Salas said. “Venezuelans traveled abroad regularly, bought property in Florida, were part of this elite class.”

Still, in 1975, a former oil minister and founder of OPEC warned about the hangovers of oil booms.

“I call petroleum the devil’s excrement,” Juan Pablo Perez Alfonzo said. “It brings trouble … look at this locura (madness) – waste, corruption, consumption, our public services falling apart. And debt, debt we shall have for years.”

In the middle of this boom, the country nationalized oil. The central government bought out international firms like Shell and Mobil, and formed a government-owned company to control all drilling. The company, Petroleos de la Venezuela S.A., is known by the acronym PDVSA. At PDVSA headquarters in Caracas, the company declined our interview request.

In the 1980s and 90s, PDVSA was widely seen as a world-class company. It boasted top global talent with multinational training, foreign drilling partners, willing investors and a sterling bond rating. The company made plans to double oil production to 6 million barrels each day.

Hugo Chavez changed everything. The socialist president won election in 1998, and his regime began spending oil revenue on new programs for the poor in education, housing, health and food. He clashed with PDVSA, calling it a “black box” controlled by foreigners, and set a lower target for oil production.

In 2002 PDVSA workers went on strike against Chavez.

“So he fired them, 20,000 to 30,000 people,” said Russ Dallen, managing director of Caracas Capital Markets and head of Latinvest, an investment bank, “and replaced them with people who were politically loyal to him.”

“Hugo Chavez transformed PDVSA from something profitable into something he could take money out of,” said refinery worker Ivan Freites, secretary of the oil workers union in Venezuela.

Freites said PDVSA for years ignored maintenance of oil facilities and safety. Four years ago, an explosion in the country’s largest refinery killed 42 people, the worst accident in the nation’s oil history.

“They did not buy workers security gear or protective equipment. In some places PDVSA hasn’t given out safety gloves in two years.”

PDVSA struggles in other ways. Venezuela’s more recently discovered oil is really thick. Professionals call it “extra heavy.” But PDVSA hasn’t built enough new facilities to process all of it. So the company has to dilute it with light, sweet crude, imported lately from the United States of all places.

The management struggles of oil – the only thing Venezuela really makes at scale – have held production down to less than half PDVSA’s target. And now, prices have gone bust, leading more observers to recycle the line about oil and the devil’s excrement.

Catch the rest of Scott’s coverage on Venezuela here.