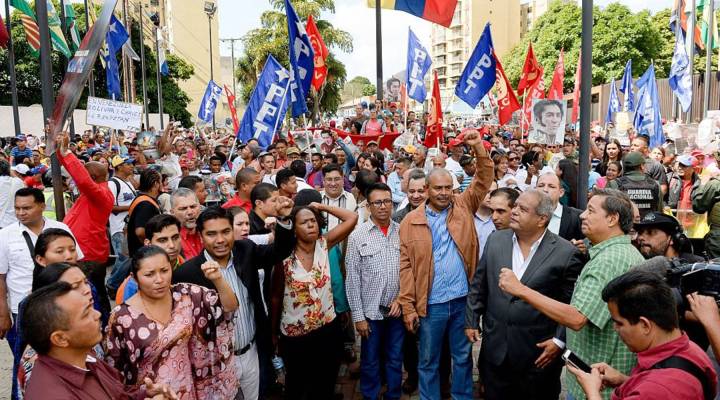 Oil prices are near 11-year lows, and nowhere is the economic pain worse than the country with the biggest oil reserves on earth: Venezuela.

By some estimates the worst economic performer in the world, Venezuela’s economic crisis has pushed the Socialist party out of a majority in the country’s congress. And last week the opposition took power for the first time in 15 years.

One big portrait was conspicuously absent from the walls of the Venezuelan Congress this week when the new opposition majority walked in: a picture of Hugo Chavez, the late president and socialist hero to many.

His so-called Chavismo model for the economy has now collapsed into mass shortages.

“Imports of the toilet paper and other products have been really backed up, so to speak. Even food staples, things like rice, beans pasta, things the government controls the price of, have become more scarce,” said analyst Reggie Thompson with the geopolitical intelligence firm Stratfor.

Russ Dallen, with the investment bank Latinvest, said, “You have to stand in line at the government stores for six to eight hours to get in to see what they have available.”

Dallen said there are black markets, but only if you have tens of thousands of bolivars, or Bs, in your wallet.

So one of the first things on the agenda of the opposition party is to domestically produce food and basic goods.

Right now, just about the only thing Venezuela produces is oil and gas. Other sectors have been crowded out.

“One Venezuelan minister called oil the devil’s excrement, because it has been a curse to so many countries and caused so much trouble,” Dallen said.

Here’s how it played out under Chavez, and now his successor Nicolas Maduro.

Venezuela spends its petrodollars subsidizing oil to sell it cheap to allies like Cuba and sells ultra-discounted appliances and gasoline to the people, which also drains public money.

“Gasoline is less than a penny a gallon in Venezuela,” Dallen said. “So when I fill up, it costs me less than 25 cents. And the majority of that 25 cents actually goes to pay the tip of the guy that fills up the car.”

For years, subsidies earned the socialists political support from its base, the poor — and from Latin American neighbors.

But slowly oil production fell, due to underinvestment and mismanagement. Chavez fired all of the state petroleum engineers and geologists.

“And then the price of oil collapsed,” said Francisco Monaldi, energy professor at the Venezuelan business school known as the Institute for Advanced Studies in Administration. He’s also affiliated with Harvard and Rice.

“That further generated a major economic crisis,” he said. “We have had two years of recession and this year is going to be a recession probably, too.”

By one U.S. estimate, Venezuela’s inflation rate is nearly 400 percent. Shortages have driven prices on the black market sky high. Meantime, the central bank has printed and printed bolivars. So they’re increasingly worthless by the hour.

“We are on the brink of hyperinflation,” Monaldi said. “We have already the highest inflation in the world. But it could become much worse, like the inflation that we had in the Southern Cone, which were about 10,000 percent. That is one of those situations that are almost as bad as a war.”

The opposition has a long to-do list to turn this around. Cut spending. Stop giving away gas. Make changes at the central bank.

But Reggie Thompson at Stratfor says none of this will be easy. Just before losing their majority, the socialists took away the Congress’s oversightof the central bank.

And appointed political friends to the Supreme Court, which can check the Congress.

And it’s unclear how willing the new opposition will be to take the heat. After all, belt-tightening’s no fun.

So some already predict political stalemate. And if nothing happens, and oil prices stay low, the country could default on its foreign debt.

That would cut off borrowing for Venezuela’s government and companies — making things even worse.