Under Armour gets a makeover for women

Under Armour gets a makeover for women

The sports apparel company Under Armour is opening a new store in Baltimore Friday to test a new, lighter strategy.

The company was founded by a former football player and is known for its hard-core, performance sportswear. An early slogan of the company was, “We must protect this house,” chanted by super sweaty football types.

That strategy’s did well by the company, which currently has a market cap of over $5 billion.

“You know you listen to these presentations by the management and it’s like they’re half time rallies,” says Sean McGowan, an analyst with Needham and Company. “That’s great and it’s worked phenomenally well.”

But McGowan also says that early attempts to attract more female customers could be summed up as making men’s clothes smaller and pink.

Now the new store, which also has men’s and kids’ gear, is a lighter, cheerier store experience.

“If they can bring a little element of surprise to make her feel like she’s having a glamorous moment in a sweaty gym, that’s key,” she says.

It’s also key to the company’s growth prospects. Women’s sales were less than half of men’s sales last year. 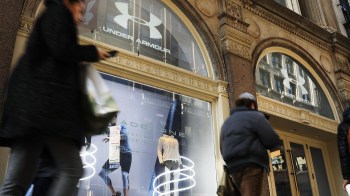 Under Armour investigation focuses on “revenue recognition.” What’s that?