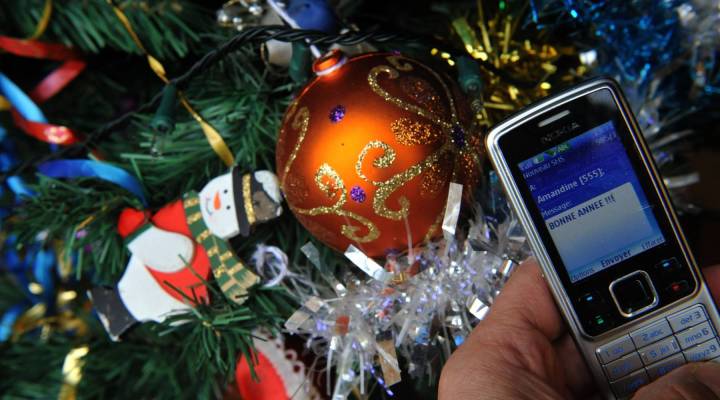 COPY
This holiday season, all of us cell phone users have much to be thankful for: Texting turns 20! FRED TANNEAU/AFP/Getty Images

This holiday season, all of us cell phone users have much to be thankful for: Texting turns 20! FRED TANNEAU/AFP/Getty Images
Listen Now

Today marks the 20th anniversary of the text message.  The first one went out on this day back in 1992 at a Vodafone Christmas party. It read, simply, “Merry Christmas.”

Still, mobile consultant Chetan Sharma says the almighty text message really took off in 2003, “the second season of American Idol. They partnered with AT&T to do a campaign for voting.”

Seven and a half million people texted their votes to American Idol, and a great American passtime was born. Texting now generates $20 billion a year for U.S. telecom companies.

“For example, texting someone to ask them out on a date might be a little bit less nerve wracking than calling them to ask them out on a date,” says Smith. “There less chance of in-your-face rejection; also, it is so much easier to cancel plans with a text message because you don’t have to face the person.” Smith asserts that she does not think that’s actually a good thing.

Trendy as it is, texting is already starting to be passe, says consultant Chetan Sharma. A report released by Sharma earlier this month found that the number of messages sent by Americans declined for the first time last quarter and texting revenues fell. So how are we asking people out and canceling plans these days?

Instant messaging, says Sharma, namely Apple’s iMessage, Facebook messaging and other services that go through a browser and are, therefore, cheaper for users.

Texting…Only 20 and already over the hill.