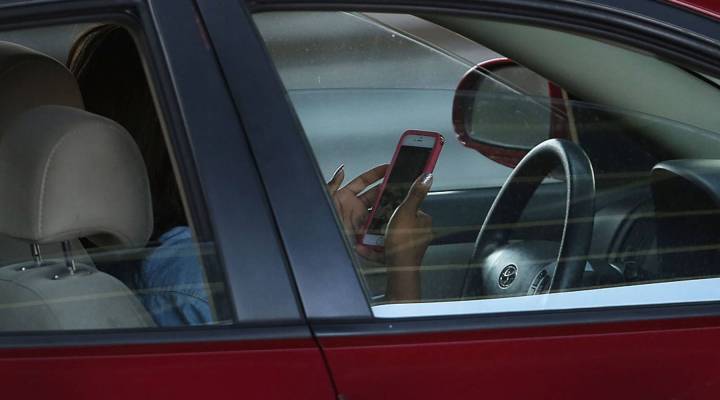 COPY
A driver uses a phone while behind the wheel of a car in New York City. Spencer Platt/Getty Images

A driver uses a phone while behind the wheel of a car in New York City. Spencer Platt/Getty Images
Listen Now

In 2011, Ben Lieberman got the call every parent dreads. His college age son had been in a car accident and later died. Lieberman was told the driver fell asleep at the wheel. But the accident happened during rush hour – on a windy road. So Lieberman wondered if the driver had been texting but says he was shocked at how difficult that can be to investigate.

“I learned the hard way that there’s really no system in place right now,” he said.

It took Lieberman six months in court to get the driver’s phone records. But phone records don’t show as much as you might think. CTIA, a trade association that represents the wireless industry, says operators can see when a data session is conducted, but it’s difficult to distinguish what that information is. Phone records don’t show when specific apps like Snapchat or Instagram are used.

“Saying get the phone records is like saying take a Breathalyzer test, it only detects tequila,” said Lieberman.

But there is no Breathalyzer for cell phones.

Distracted driving — when drivers eat, put on makeup or text — causes more than 3,000 deaths a year. The National Highway Traffic Administration says it also costs $46 billion annually for everything from injuries to vehicle repairs, and of course, lost productivity due to death. With the exception of Montana and Arizona, texting while driving is illegal in every state, but unless police catch you in the act, it can be very hard to prove.

Lieberman became an activist, talking to legislators, police and tech companies like Cellebrite. The company developed a prototype called the Textalyzer, a tablet about the size of an iPad that police can plug into a driver’s phone. Software scans the phone’s system logs and pulls up a list of activity. Pricing has yet to be determined but the company says police departments would likely need to buy a device, and a subscription – for upgrades and support. New York Governor Andrew Cuomo has directed the state’s Traffic Safety Committee to review the technology and Chicago’s Public Safety Committee will be reviewing legislation that would introduce its use. But similar legislation is stalled in Tennessee. The Textalyzer would allow police to scan driver’s phones without a warrant, but wouldn’t show content.

While Lieberman and Cellebrite point out that the device will not show activity, such as Facebook pages or Instagram posts, privacy experts say they have big concerns.

“For centuries, we’ve had a very clear legal framework by which government agents access extremely private sources of information about us, and that’s the warrant, based on probable cause,” said Stanley.

Stanley said police can search you without a warrant if you’re arrested. But your phone is different. So just pulling up a list of apps we use for anything from religious or sexual interests would be intrusive. Hannah Bloch-Wehba, who teaches media law at Yale, agrees. The issue here, she said, is that just looking at activity on your phone is a search.

“The analogy is sort of like if the police were to come and open your file cabinet and look at all of the titles of the files in the cabinet but weren’t to look at the contents of those files,” she said.�� “Opening the cabinet is itself the search. So plugging in the Textalyzer there is the search. And it doesn’t matter whether the police look at the content or the activity on the phone. They’ve still searched the phone by plugging in the device.”

Ben Lieberman said he disagrees with Bloch-Wehba’s interpretation of the law. But he says, regardless, the Textalyzer is just a prototype. It can be changed. In New York, where the Traffic Safety Committee is reviewing the technology, the state wants to get feedback from drivers this fall.