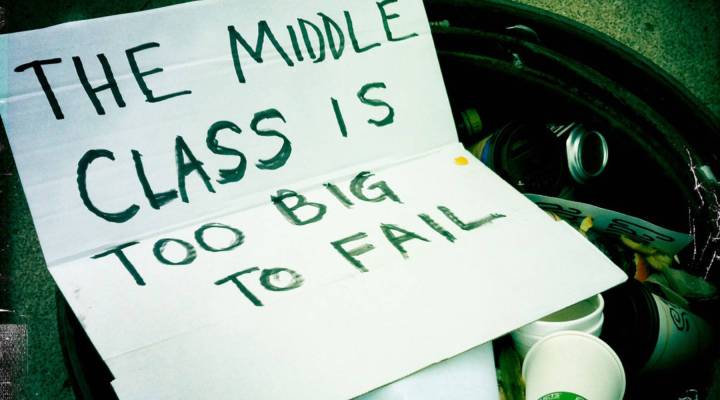 COPY
Why are so many people in the middle class struggling right now? Author Hedrick Smith discusses the events that hurt the middle class and what can be done to help it. flickr.com/Lorika13

Why are so many people in the middle class struggling right now? Author Hedrick Smith discusses the events that hurt the middle class and what can be done to help it. flickr.com/Lorika13
Listen Now

The middle class is at the forefront of this year’s presidential election and for good reason.  Middle class prosperity is the greatest influence to the overall health of America’s economy. Both candidates take every opportunity to address how they will strengthen the middle class now that so many of those households are struggling. But to understand how the middle class ended up in such a mess, you have to look to a long history of decline set in motion by social and political factors. Pulitzer-winning reporter Hedrick Smith explores this history in his new book, “Who Stole the American Dream?”

In the ’70s, Smith says two things happened to hurt the middle class. First, wedge economics — the wedge that split the middle class workers off from their share of American prosperity and from the profits of American companies.  Second, there was a tremendous power shift in Washington that has led to a “consistent policy tilt on behalf of corporations, on behalf of the corporate elite and the financial elite in this country.”

Smith says we haven’t been able to save the middle class because we’ve been doing a lot of things to hurt it.

“CEOs of companies thought it was their job to sustain and support the interests and balance the interests of the various stakeholders in the company, and that word ‘stakeholders’ is very important. It’s not shareholders alone, but it’s management, it’s employees, it’s suppliers, it’s customers, it’s the communities they lived in,” he says. “As productivity in the American economy went up, so did the pay of the average person in America. That has not been true since 1973.”

In his book, Smith discusses the shift from a pension system to the 401(k). He says it has been a disaster for middle class workers.

“You can’t build a retirement system, you can’t build a nest egg if you don’t plunk the money away every year, but people can’t do that. They can’t discipline themselves. They’re not smart about the market. There are people who have done well, but it’s a small minority,” he says. “That is one of the big thefts of the middle class dream. Hundreds of billions of dollars of annual expenditures have been taken off the company books and they’ve been put on the shoulders of individuals.”

Smith says people need to organize in order to fix the broken systems that hurt the middle class. He says politicians have no choice but to pay attention to organized efforts and he believes there is going to be a change.

“Watch one day in particular — August 28, 2013. That is the 50th anniversary of the The March on Washington [for Jobs and Freedom]. Right here on this program, I’m going to predict there’s going to be another march on Washington,” says Smith.