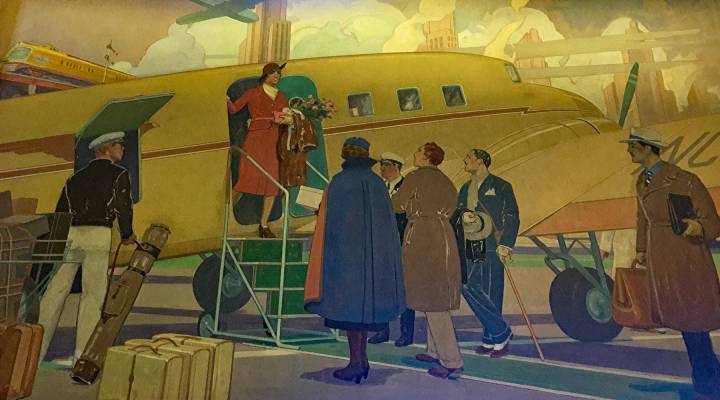 COPY
A historic mural in the lobby of the Brown Palace Hotel in downtown Denver depicts wealthy high-society tourists arriving by plane to vacation in the Rockies. Mitchell Hartman/Marketplace
Economic Anxiety Index®

A historic mural in the lobby of the Brown Palace Hotel in downtown Denver depicts wealthy high-society tourists arriving by plane to vacation in the Rockies. Mitchell Hartman/Marketplace
Listen Now

There is a sprawling colony of tiny cabins, family bungalows, dining and lecture halls, and recreation facilities on the outskirts of Boulder, Colorado, that shows just how accessible and affordable regular vacations were for some middle-income Americans in the past.

Today, the 26-acre Colorado Chautauqua center, at the edge of public parkland near the popular Flatirons hiking area, operates as a nonprofit lodging and events facility (it is also a national historical site).

Three women take in the twilight on the porch of a Chautauqua cabin.

“Back in the late 1800s, it was a retreat for Texas teachers,” explained receptionist Andrew Smith, whose office is in a century-old building that once housed the Chautauqua’s administration. Smith said the Chautauqua hosted Texas teachers — whose travel and stay was sponsored by the Texas Board of Regents and subsidized by a local railroad company — through the 1920s.

“So they’d come up here in the summer, enjoy the cool mountain air, and then attend lectures and that sort of thing,” said Smith. According to the Chautauqua’s archivist, this summer vacation typically cost a Texas teacher $75, which covered room, board, lectures and recreation for the entire family for six weeks, train tickets included.

Today, some middle-income Americans are struggling to achieve a key attribute of middle-class life: taking vacation.

The recent Marketplace-Edison Research Poll found that 24 percent of respondents had not taken a weeklong, out-of-town vacation in more than five years. Meanwhile, according to a 2015 survey published by the Pew Research Center, 45 percent of respondents ranked having “time and money for vacation” as necessary to be considered part of the middle class. Today, many workers don’t have sufficient income to save for regular vacations, and/or they may not get paid vacation as a benefit of employment.

But a look at the history of vacationing in America reveals that it has not always been this hard for working- and middle-class families to take significant out-of-town vacations. Historians find that vacationing in the early-to-mid-20th century was more affordable on a typical worker’s salary and was sometimes subsidized by a worker’s employer or labor union.

There were Chautauqua camps all over the country, an example of what University of Colorado-Boulder historian Patty Limerick calls “the democratization of recreation.”

Limerick directs the Center for the American West at the University of Colorado in Boulder, which has been a gateway to the recreation opportunities of the High Rockies for more than a century. Today, that includes Vail and Aspen, with their multimillion-dollar ski chalets, gourmet restaurants and luxury shopping.

That brings to mind an earlier American Gilded Age, said Limerick. “The Rockies in the late 19th century was quite elite. You had to buy railroad tickets, you had to pay for expensive hotels — and that was the whole point, that it was exclusive.”

But she said that with the New Deal, the rise of strong labor unions and the post-World War II economic boom, came new prosperity — and travel options — for the American working class.

“By the mid-20th century that’s really transformed in the affordability of individual automobiles,” said Limerick. “My goodness, a lot of people had a good time. You can have a dad who’s working in a factory, and works hard but is making a significant wage, and you can car-camp if you need to, and there’s a proliferation of those kinds of facilities and tiny cabins.”

Organized labor promoted the right to time off for vacation, as Pete Seeger sang in “Talking Union,” 1941:

“You got to build you a union, got to make it strong.
But if you all stick together, boys, it won’t be long.
You get shorter hours, better working conditions,
Vacations with pay — take your kids to the seashore.”

But organized labor wasn’t the first to advocate for paid vacation, said historian Michael Berkowitz, author of “A ‘New Deal’ for Leisure: Making Mass Tourism During the Great Depression,” in the edited collection “Being Elsewhere: Tourism, Consumer Culture, and Identity in Modern Europe and North America.”

“Department store workers in the 1920s are going to vacation camps on a lake, at the Jersey Shore, sponsored by their department store,” explained Berkowitz.

The movement started, said Berkowitz, with progressive employers in the early 1900s who were convinced that salaried workers — from managers to secretaries — needed time off because of “working in offices, indoors, so they need to be rescued and have activity, to be reawakened — for productivity and efficiency.”

Soon, manual laborers were seen as needing time off, too.

The dining hall on Chautaugua grounds in Boulder, Colorado.

“It’s really the management literature that starts emerging out of the 1920s — studies of fatigue in World War I — that begins to suggest that not only would it be important for salaried brain-workers to get paid vacations, but wage-earners working in industry and factories,” said Berkowitz.

There was another corporate hand pushing vacationing from the Depression through the post-war boom: industries related to travel and driving. Berkowitz said this mass-media tourism promotion — funded by car and oil companies, motel chains, local chambers of commerce and publicly funded tourism boards — helped solidify the middle-class “travel habit” in America.

One example is newsreel-type broadcasts hosted by Lowell Thomas, who did promotional reports from the New York World’s Fair in 1964, sponsored by U.S. Steel. “World’s fairs, I think, play an important role in cultivating this notion,” said Berkowitz. “Disneyland is essentially a permanent World’s Fair.”

And, 50 years ago — with cheap gasoline and the new interstate highways lined with budget motel chains like Howard Johnson’s — Disneyland could be affordable as a weeklong road trip for a Michigan factory worker’s annual summer vacation.

To put the historical shift in context: that Colorado Chautauqua center that used to cost teachers $75, all in for a Texas teacher’s entire family to stay for most of the summer? A recent stay cost $190, not including tax, for one night. 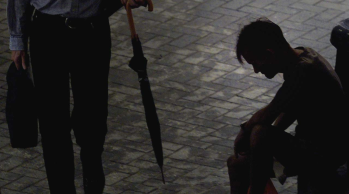